Jan, Mom and I turned in our old homes and moved here twenty five years ago for the sole reason that Jan and I wanted to move our weaving business to the next level and needed a studio.

We moved to the Township of Boston, a big square in Northeastern Ohio, exactly the size Northwest Ordinance of 1786 decreed, with a couple of chunks now gone due to the succession of Boston Heights a hundred years ago, and some annexation by the greedy city to the south.  The Village of Peninsula runs along part of the ragged edges of the Township.

The charming little village is locked into its canal days appearance by an historic designation obtained by some previous visionary in the village. The old houses have unchanged facades, failing septic systems and cisterns serviced weekly by the water truck.  It is so quaint it attracts tourists.  Peninsula is as art centric as they come.

The man who locked up most of the village as an historic district had a vision without a plan, leaving behind a village that tourists love to visit, but tend to spend little money in.  It is hard to be comfortable lingering in shops when the nearest public restroom is in the next city.

Way back in the nineties, shortly after we moved here, a young whippersnapper with a vision to promote his hometown moved back and opened a gallery.  Then another.  He took over another.  A group of merchants coalesced around him.   We called ourselves the Peninsula Merchants Co-Op.  Another member and I opened the Co-Op’s first checking account, and I settled into being Treasurer for Life.

With our young visionary leading, the Co-Op promoted the town, organized events, took advantage of events already in place such as the national Boston Mills Art Festival, held in the township.  We started the village web site.  Funding came from grants written by young Turks with local businesses to promote.

Jan’s and my business is up the hill from Peninsula and around the corner, off in the township. I resisted the urging of friends in town to move shop to the village.  Our overhead was too darn comfortable and our art show business model wasn’t compatible with moving our work to a place in town.  But I liked my associates, and was learning a lot.  Treasurer for Life was OK, until they got the first five thousand dollar grant and were working on another.  The checking account had my social security number on it!

Thus, I am responsible for the existence of the Peninsula Area Chamber of Commerce.  I got the federal ID number, filled out the reams of paperwork, chased down other officers for life to get signatures and filed in time to open a Chamber checking account with its own ID for the money on hand and the grants zooming down the pipeline.

Ten years into Treasurer for Life our own business had grown to twelve employees, our own accountant was retiring and a new business came to town.  A young public accountant set up business in her kitchen.

She dropped in to visit us and see what weavers do.  I engaged her on the spot and also asked her to be Treasurer for Life of the Chamber. She agreed.  As I recall, she showed up at the next meeting with the records and said “Hi, I’m your new Treasurer for Life.”  She’s been at it for the last thirteen years. 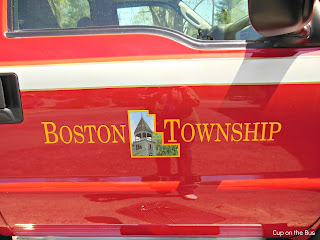 Some post scripts:  my friend, the young whippersnapper, eventually filed for bankruptcy, a not unexpected turn for a visionary in a town with no facilities.  He is now an international designer.

Mr. Bob, our accountant of many years, was in his eighties when he retired.  Every single year, because of the amount of cash he knew I could have on leaving a show, he asked me if I carried a gun.  Every year I said “No, Bob.  I carry a phone.”

My accountant for life outgrew her kitchen and now has an office in the township hall, down the hall from mine.  Her cat is so pleased.

Posted by Joanne Noragon at 3:17 PM