I may be the only one surprised that a twenty by fifty foot garden overrun by twenty five years of crabgrass roots hasn't been sorted in just a couple of weeks.  I like “sorted”, an abbreviation for a sweeping fix, and just not used over here.  Three grandchildren, a grandma and assorted willing hands have reached the last stage, no matter what happens.

The grandchildren are in school all day, we have been delayed by one day of heavy rain, and yesterday it went beastly hot on us, which didn't stop us from capitalizing on all the work the kids did with their father on Memorial Day.  This morning I worked for two hours, before the temperature reached ninety. 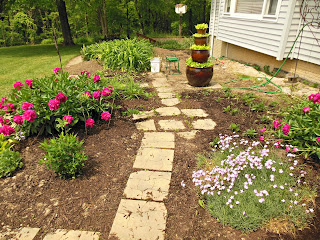 I cleared weeds between the old pavers and disposed of the next to last section of turned over weeds.  Tomorrow I’ll clear the turned over weeds behind the lettuce tower plus the last few sections of paver weeds. 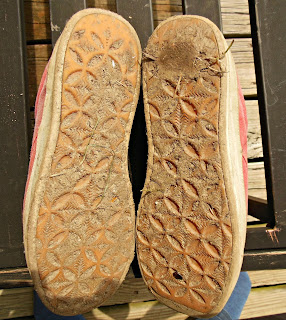 Now I am cooling off from being mighty hot.  The mud on the bottom of my sneakers is drying; I've watered Linda’s box of lily of the valley one more time in hope of planting them soon; and all in all it’s looking as if my cheerful crew can come mighty close to the end of this project over the weekend forecasted to be much cooler. 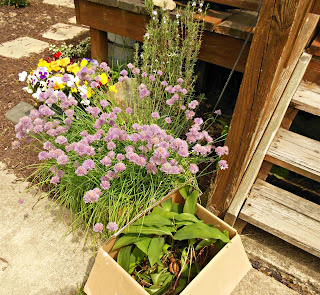 These three children own this project.  They have mentally engineered extending the paver path with the excavated stones.  They want to commence replacing some of the garden art now, but the big boss (me) is holding off.  The girls worry the birds won’t find enough food without the feeder the raccoon raided.  I say let the raccoon be good and gone.  Not to mention, it will be fun to make a sweeping arc of garden art, starting with my original acquisition, a  street lamp from Louisville, Kentuncy. 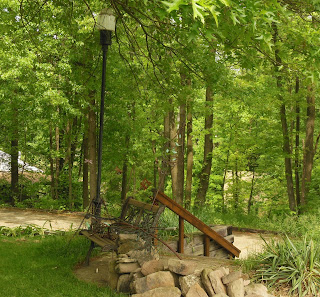 I’m cooling off from something else.  Senior Pictures.  Hamilton will be a senior next year, and gave me the brochure from the official school photographer yesterday.  Yesterday!  He won’t be in twelfth grade until September.  Moving on, what’s going on here?  These aren’t senior pictures.  They’re more like teen age fantasies.  “I don’t have to get on with being an adult because I’m stuck in the Sesame Street present where I am the most important person in the world.” 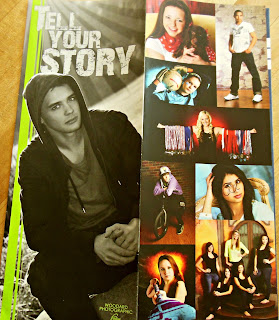 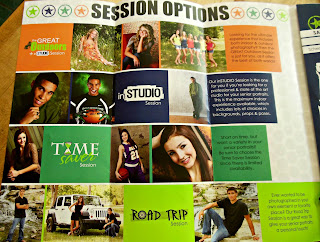 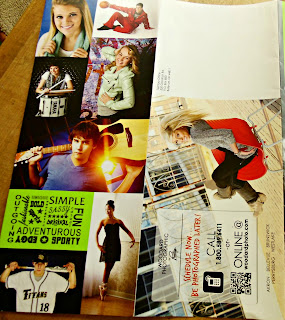 I called the company to get more information.  Of course I was able only to leave a message.  No return call yet, four working hours later.  My old cynical self knows the company is comprised of youngsters pandering to, fostering these high school senior's illusions (and their parents).

I went on line and checked their web site to find if they offer head and shoulder shots in grandma approved clothing.  This grandma, by the way, is no prude, and has not banned anything she has yet seen go to school, except one ragged shirt of Hamilton’s’ and that awful, raggedy red hoodie of Emily’s. No, they do not show  examples of what I will send Hamilton wearing.

Then I did an internet search for actual pictures published in year books as the official “senior picture.”  I found this high school in Illinois has pictures on line.  The most recent year available is 2008.  Take a peek.  Just like the pictures in the brochure.

It’s a new world, grandma.  So, I’m cooling off.  I can tell you that’s not how my grandchildren will present themselves in their senior pictures.

Posted by Joanne Noragon at 1:29 PM