Hamilton is taking several Advanced Placement classes, which means he can also receive college credit for them.  Bring them on. At upwards of $400 a credit hour in Ohio's public universities he can't save himself too much money.

The AP exams are imminent and he's been back to school in the evening for some extra study.  I picked Hamilton up Monday evening from a history review and he had a tee shirt his teacher had distributed.  "He's kinda goofy, Grandma.  We all like him."

The front of the shirt had a handsome young man's photo and said he was running for president in 2012.  The back of the shirt had answers.  One of them could be right if you were stuck on a question.  I laughed all the way home. 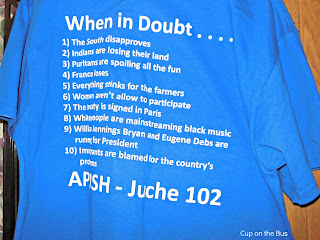 Here is the orchid Caroline gave me for my birthday a year ago March,  because I admired her ice cube a week orchid.  It's blooms lasted longer than I can recall, and then around my birthday this year a new spike began growing.  Look at all the buds. 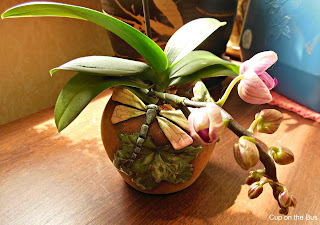 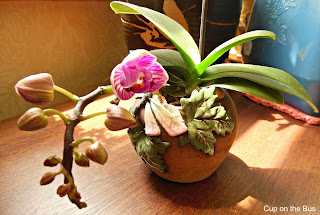 I'm off to Broad Ripple and will bring a camera of pictures and a full show report.  Have a good weekend.

Posted by Joanne Noragon at 6:03 PM