With fifteen around the table Sunday, some good stories were bound to be told.  Some were.

After flipping through the characters of several reality shows we found a common thread in Storage Wars.  One of us told the story of a son who realized a year later that the remaining household goods in a storage shed were “just things.”  He told his buddy to cut off the lock, sell it all and keep the proceeds.

And from the other end of the table we got the story of the day.  Another friend is a builder and his wife has the unenviable task of keeping track of and updating the furniture staged in model homes.

They do own a storage unit her husband built and operates, and she uses a unit or two to store the excess.  Of course they had their share of abandoned units, and the occasional auction of the contents.  As Storage Wars, the television series, became more popular Jeane saw a definite uptick in the attendance at an auction and the amount of money they realized.  When she noticed a regular bidder responding with a “Yeep”, she knew the time had come; there was opportunity for a sharp contractor’s wife to turn her inventory, too.

Jeane added a unit of her own to the next several auctions, nicely staged.  She was tempted, but did not put a cardboard box up front labeled Grandma’s China.  The results were as anticipated:  all the unwanted furniture was gone.

As Jeane said, at her last garage sale her son’s lemonade stand made thirty dollars, more than she had taken in.  She didn’t have to tag anything, put it on her driveway for a long hot afternoon, and, last of all, collect back up what didn’t sell.

Tom and his son, Tommy T, last Sunday.  Every notice how little boys walk like their father walks.  They grow up and lean over deck rails the same way, too. 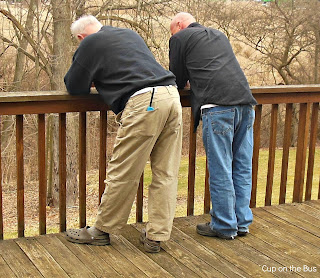 And finallly, visit my sister’s blog, Janice loves to quilt. She just finished a customer’s art quilt destined for a national quilt show.  Stunning, and now I don’t have to tell you about it.

Posted by Joanne Noragon at 3:00 PM