Did the sun shine anywhere last week?  It certainly did not shine in Wisconsin, save half an hour Tuesday.  I woke up Sunday and Monday to pouring rain, and listened to loud thunder crash one night.

Ann hustled me out the door Tuesday to get to Fleet/Farm and get alfalfa cubes “before it starts raining again!”  I hardly believed her.  Billy, together with Nanny, had been foraging for two days because the cubes come in paper sacks and if they get wet they mold.  So, neither Pat nor Ann had ventured to town for more.  I’m only repeating what I’m told. 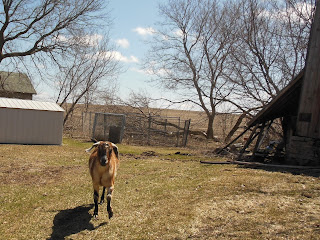 Billy saw us off.  We didn’t beat the rain.  I stayed in the car.  Ann came back with a cart of half a dozen sacks.  She was not happy.  They are forty pound bags, not fifty, from a new source.  They are packed in shiny, waterproof paper, so the pellets stayed dry.  They cost more.  And, they still filled the car with their odor and we arrived home sneezing and with running eyes.

The temperature never exceeded forty five; except as noted, it never stopped raining.  We had more overnight lightening storms and howling winds.  Ann and I stayed warm, visited and watched the creek rise. 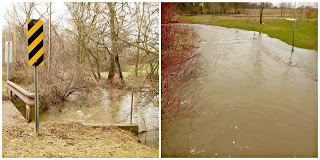 The only birds in sight were stalwart robins, chickadees and an occasional sparrow.   I made no attempt to set up my tripod to take pictures.  Since I cannot hold the camera steady enough by hand for telephoto, the shots only add to the forlorn feeling. 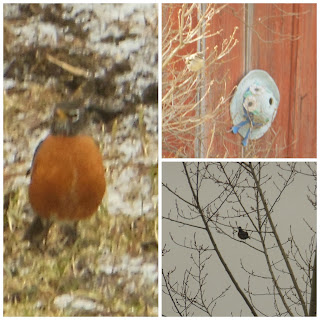 There is nothing I can say of the tragedies of the week; the homemade bombs at the Boston Marathon and the tragedy of the explosion at West, Texas.  Hooray for the officials, the police and the people of Boston for the swift conclusion.  My heart is broken for all the families who will deal for years with the deed of two young men; losers, their uncle called them.

Then the explosion. Ann and I looked at each other.  Her township is the size of West, Texas.  Mine two thirds as large, and each with EMS services the size of the West, Texas force.  About thirty volunteers.  Like the firemen who ran up the steps of the World Trade Center, that would have been our departments evacuating a nursing home and a neighborhood because an explosion was imminent.  One third of the force killed, doing their job, saving lives.

In a big town or city perhaps the safety forces seem more remote.  If you can, smile and thank one of them for being just like a volunteer member of the West, Texas force.

Posted by Joanne Noragon at 5:35 PM