This is an old cat story.  I grew up in the forties and the fifties, when practicality trumped everything.  Some of the dogs and most of the cats in our little world were neighborhood pets.  They belonged to everyone.  One child would be “followed” home by an animal (“Can we keep it, pullize”!); weeks or months later the animal followed someone else home. If we harbored cats when it was time to leave for vacation, Mom simply took them to the pound.  Dad ignored any cat in the house, although he did tell us to listen to the cat.  It’s saying “Mee-out.”

After all the children dispersed, Mom and Dad still hitched up the camper and went exploring.  Uncle Bill went along those years, and provided the additional brawn mom needed to get a camp set up.  She did much of the vacation driving in the early seventies, too; Dad’s strength was failing, but not his interest in new rocks.

A cat adopted dad at a campground in Arkansas.  She came out of nowhere and spent several evenings in his lap, after, presumably, waiting patiently for the little band of campers to return from their day’s outing.  When it was time to leave she jumped into the car and settled on dad’s lap.  He closed the car door and the vacation trip proceeded, as planned.

Dad named the little orange and white tabby Katherine (long for Kitty).  Katherine went to the vet for neutering, and settled into her life at 729 Moraine, taking care of our dad.  Katherine checked dad’s whereabouts first on coming in, walked with him on his short jaunts from back door to patio, spent evenings in his lap.

The last couple of years of his life dad was “chair-ridden,” spending his days in his red Barca-lounger, not getting up for much more than to eat lunch.  Mom would come in from work and help dad unload his vest pockets of mice Katherine brought him for sustenance over the day. Katherine kept her sharp eye on him, even raking my arm from top to bottom when I lifted the scissors to trim his hair.

The great Midwest blizzard of January, 1978 found dad completely bedridden, with round the clock nursing care provided by Mom, Walt, Jan and Katherine.  Dad remarked to me one weekend I was there visiting, “This dying business is like a train ride through Siberia.” He passed away on a cold, cold day, February 20, 1978.

The next day Katherine came through the living room, head high, Dad’s red ski cap in her mouth.  Jan snatched it away from her as Katherine passed.  We heard Katherine leave through her little kitchen door. She never came back.

I learned later that when mom first met dad she didn’t even meet him, barely saw him.  He blew through the home of a mutual friend for a quick introduction of his fiancée, Kitty. 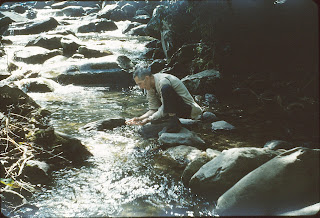 Posted by Joanne Noragon at 4:42 PM