Red berry trees on a cold and dreary day


Emily’s high school band, and many, many others, are playing at Severance Hall in Cleveland, today.  A beautiful concert hall.  I bought tickets around for family members who don’t share my tin ear.  Tom and Hamilton dropped Emily at her school bus and went on up to Cleveland.  Tom wouldn’t miss this for anything and Hamilton is interested in hearing how his new band performs.

That boy will be just fine.  He sat in on their swing band practice the other night and a regular band class during the week.  His trombone is in the shop, but we hope to have it back in his hands tonight.   At supper Emily teased him about being at the back of the pack of trombones in the band.  He snorted.  “I’m better than the best of them!”  Now, I’ve never raised boys, and I had to grin.  “You still need to try out, Mister,” she reminded him.  Good to have him here. 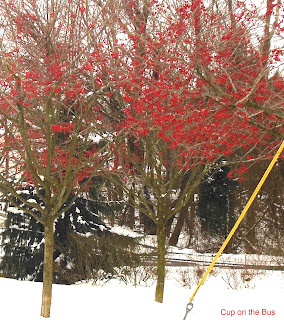 Coming back from an errand we pulled into a drive to take a picture of a red berry tree, half stripped of berries, but plenty left for the birds. I have no idea what tree this is, many have red berries in winter.  They are cheerful to see on such a dreary day. 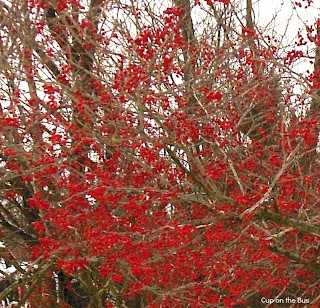 Posted by Joanne Noragon at 3:40 PM