I had a cat named Krueger, back when I was in college.  Krueger lived in Akron and I was in college in Cleveland.  This was 1961, and didn’t involve a nightmare, saving perhaps Krueger’s.

The house at 729 Moraine was built on a lot several feet lower than the lot of our next door neighbors, the Coles.  A stone retaining wall ran the length of the lot, and in our backyard orange tiger lilies cascaded down the wall every summer.

Our grape arbor flanked that wall in our back yard.  The grape arbor was built of several whitewashed phone poles with cross arms at the top and chicken wire forming a roof for all the grape branches.  The grape clusters hung down for picking every September.  They were nearly six feet overhead; Mom had to reach up to pick them.  Dad had a bird feeder hanging down from the heavy grape branches and he kept it filled every winter.  Krueger, of course, sat under the feeder waiting for a bird to fall into his mouth.  One never did.

I was home for Christmas vacation.  It was a winter that couldn’t stop snowing, and the snow my brothers’ shoveled from off sidewalk from the back door to the garage grew steadily deeper on each side of the walk.  The retaining wall stopped the wind from blowing the snow away, and it just kept accumulating.

The snow cover in the area was so bad that dad wondered where the birds were finding food, and made sure he kept his feeder filled.  When he could no longer reach it, he threw cups full on top of the snow, which had reached shoulder height on that side of the yard, under the grape arbor.

I looked out the back window one afternoon and saw quail at the feeder, which sat on the five feet of snow accumulated under the grape arbor.  I reflected how bad the winter was for them that they had come up over the hill to forage at a bird feeder.

Then I saw Krueger.  The big black cat had sprung to the top of the snow pack and was slinking along the surface, going to get him a quail.  Should I run to the back door and yell at him?  It was two rooms away, would there be time?

Dad stopped behind me at the window.  He tapped my shoulder and pointed a little higher.  There on the wall, beyond the quail under the feeder, sat another quail, coolly taking in the situation.  The quail on the wall watched Krueger get closer and closer and closer.  Then he said, in quail language, “Now, boys.”

Those quail fell on Krueger from a feet first descent, then wings pounding.  There was five feet of snow available and they put him down about four feet before they dusted off and left. A very subdued cat emerged and slunk away.  I didn’t feel the least bit sorry for him. 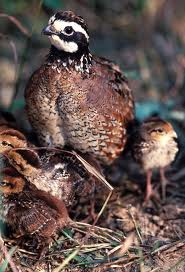 Bobwhite quail.  I have not heard a bobwhite since I have been an adult.