On the road with Mom


Mom passed most of her driving skill genes along to her kids, and I’m pleased to say I sent those genes, at least, on to my kids.  Both are very good drivers, unlike their father. (I knew him before the term Road Rage existed; that’s the descriptor, I’ve come to understand, for his passing a driver who irritated him, cutting back in front and hitting the brakes.)

When I was young I had no idea my parents drove well.  We never broke down, had an accident or were stopped by a policeman, so there was nothing to hear on that score except a remark on the wrong doing of anyone observed pulled over to the curb by a policeman.

Mom was more obsessed with speed limits than dad, especially concerning his love of beating a train to a crossing.  Any 1950’s road he tried this on could not sustain more than 35 mph, and he certainly would not have defied flashing red lights or descending gates.  I think she disliked the impression he might impart to three children bouncing in the back seat, urging him on.

This is the same woman whose father taught her to put a car in neutral at the top of the hill “to save on gas.”  And certainly the same woman who did not protest when Dad speeded up a hill to give three jumping kids the thrill of being air born at the crest.

In thinking back on her stories, a lot of Mom’s driving skills came from her father, who I did not know, and her mother, my Grandma Rolf who took me on many trips with her.  Her dad loved cars, loved to drive and saw as much of the country as he could back in the twenties and thirties.  He taught Mom how to drive those big Buicks across country or through New York City.

Mom’s big city skills were impeccable. She was an excellent leader of a caravan of cars and took good care of her train.  For instance, my first rotary, in Boston.  I was following mom; we were in the wrong lane, and needed the rotary to stay on our route out of town.  She applied a firm rule:  my plates are out of state, let me in.  I followed in her slip stream; there was no metal on metal and not even loud application of brakes, we did it.

Her finest skill was “making the hole.”  She kept her caravan together, or changed leaders of the pack, by dropping back slightly and allowing another of us to pull in ahead of her.  We would return the favor if we needed to swap leaders.  Occasionally she would see the need of another driver, drop back and wait.  “Good, he saw the hole!” Or, “Come on, I’ve made a hole for you!” 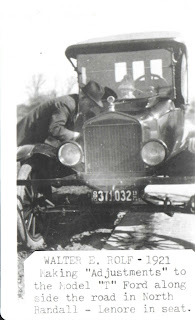 My Uncle's caption.  Mom in the front seat, watching her father's progress.

Posted by Joanne Noragon at 3:20 PM