In the dollar store one day Jan picked up a pack of eight ping pong balls, thinking the cats might like to chase them.  At first sight they were Toby’s balls.   Ryon’s exquisite paranoia will not permit him to touch one, but occasionally he watches Toby’s antics with trepidation, poised to escape if the little white sphere approaches.

Of course the little balls escaped to unreachable places, under the chest, under dressers.  Worst of all under the fridge where no grabber reaches.  The old folks in the house seldom went looking under dressers, and the ball numbers decreased.  Toby’s reprieve was the arrival of short children this summer.  They love him, he loves them and they often ferreted his balls out from dark places. 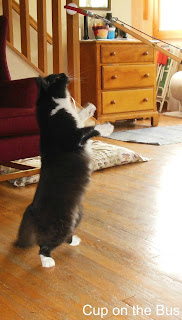 Jan was able to keep four reserve balls in the bag on the top bookcase shelf.  One day Toby begged and she reached up for the bag.  Only three!  She gave him one, but nobody would confess to giving in and releasing the missing ball to the ball monster.  Then Jan went around the corner and caught him, back paws on the chair, front paws stretched waaay over to the book shelf, and the last ping pong ball in his mouth.

Whenever we found an errant ping pong ball we put it in the little elfin ware vase on the mantle.  It held three nicely, and now Toby sat on the hearth and stared determinedly up, waiting for someone taller to see his need and release a wonderful ball.  Of course one day there were no balls in the vase that held three the night before. But, we had a mantle walking cat!

Toby was on his own.  If Emily or Laura would go searching with him he had ping pong balls.  If not, oh well.   Laura would always get down and look.  Sadly for Toby, she is in school all day
. 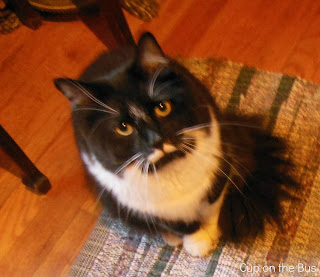 I eventually had to wonder what would happen if Toby had more ping pong balls than he could deal with at one time. Would he retreat, backing away from the onslaught of the mass of balls until cornered, he went under. 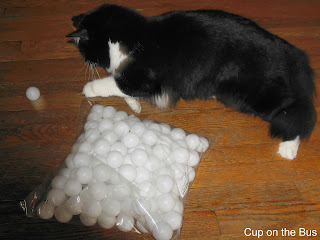 A bag of a gross of balls brought out the best of Toby.  He reached under the bag, in case balls came out from there.  He patted the top of the bag, looking for the opening.  He held the bag firmly down with his left paw and used the right paw switch blade to slice down to the treasure. He only took one ball.  He thinks he knows where he can find the rest. 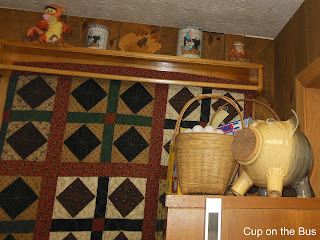 Clue:  they are no longer on the mantle.