I have a lovely shopping bag of towels for the artist open house. There are 42, a bit less than twice as many as last time, if my math is working properly. I also turned a new warp on last week, and it looked to be the nicest to date. Then I began tying it on, and devised story after story for the extra two threads I seemed to have picked up. 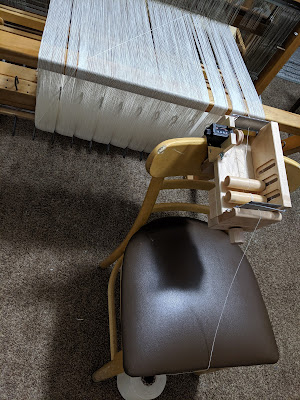 There is no short explanation here, except I should have investigated the problem before I had the entire warp tied on.  All is well on the business end, the other side, as long as my Rube Goldberg repair holds up, and the cat doesn't sit on it.

The artist open studio draws nearer and nearer. I know the little tag on each towel for the last open studio was a little fold over paper I printed myself, but six months later, I cannot reconstruct how I did it. The real solution is to apply myself tomorrow and put together the art work for a new card! And then, call it in to the card company.

In the meantime, I have an apple mandolin! All my previous encounters with mandolins have not been good. My craftsman brother made a mandolin for my sister that he eventually made a guard for, to end accidental bloodshed, even stored safely out of a drawer. That mandolin sliced potatoes paper thin, and they became potato chips! 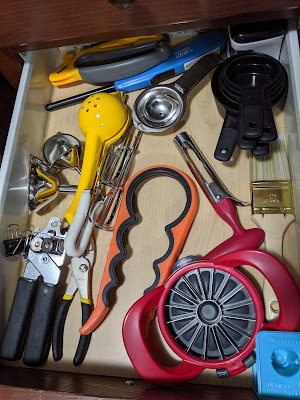 I keep an eye out for good recipes, and I saw one for an apple custard cake. They got me at apple and custard, though I was not comfortable with the instructions for slicing the apple. Basically, cut off the four sides, pitch the core and fine slice the apple. My fine motor skills are gone, and most of my gross, too. But way at the bottom, in the credits you never read, it said or use an Apple Mandolin. I found it on Amazon, of course. 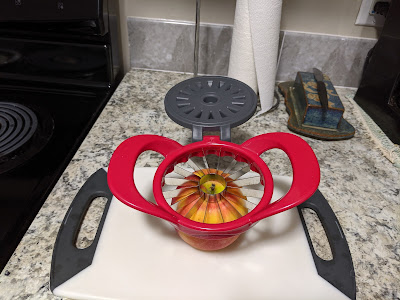 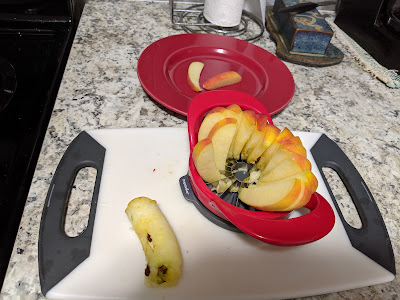 There you have it. A cored apple, in twenty four slices, for lunch! 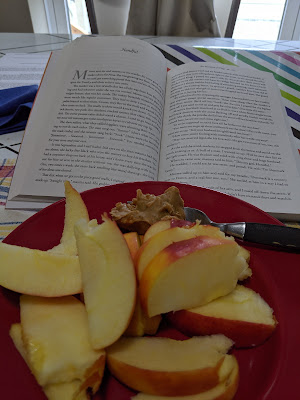 The custard cake was more cake than custard, and I made two changes for the next time. I changed a third cup sugar to a couple of tablespoons, and two teaspoons of vanilla to one. As to the dessert that did not impress me, I cut my eight inch pan into four pieces. I ate two for lunch and two for supper. So much for inviting a friend over, that time.

The book I'm reading there is The Invention of Wings, by Sue Monk Kidd. I have no idea why I bought it; but it was there on my book shelf. Shortly in I recall seeing a TV movie, or perhaps a theater movie on TV. I can't remember the movie, only that I've seen it. The book is compelling in the way the recitation of this vile part of our history is.