Over the weekend we had a cookout featuring shish kebob, our traditional Memorial Day fare.  We held it in honor of Hazel and Tony, who will be leaving this week. I think we counted seventeen in the house, including my friend Linda, who’s generally up for a picnic.  The operative phrase is in the house. In spite of the new picnic table on the deck it was not warm enough for anyone to go outside.  Even the children worked up minimum enthusiasm for throwing a football in the late afternoon sunshine.

Linda produced her new phone to get some advice.  Rather like hiring on at a job and everyone else is an “old employee,” even if they started the day before.  Not even a year ago I was a flip phoner, just like her.  But I’ve had a smart phone for six or seven months, have six apps that I use regularly out on the home screen, and am the very local expert.  If a grandchild showed me how, I’m pretty good.

Linda has a new phone too, with a slide out keyboard.  She bought it for a reason I don’t recall plus it fits in her pocket holster.  She only makes and receives calls on it; no plan upgrade.  No extra charge because it was the phone that fit the holster.

Later this week I’m going to Indianapolis with her, her roadie for the Broad Ripple Art Fair.  A couple of years ago a severe storm with high winds tore right through the grounds and did severe damage to many artists’ work.  There was no warning except one volunteer who ran through the show shouting “Take cover.”

This year the Indianapolis Museum of Art has offered to send weather tweets to any artist who signs up to receive them.  In case you wonder where this story is headed, we’re on the way.  Linda wanted to know how to tweet.  There was a general consensus her phone could tweet, but nothing was tweet ready, including her plan. Then there is the whole learning curve business.  We seventy year olds take a little longer.

I said for her near future I would download Storm Shield, the weather app endorsed by the major local television station, to my phone.  I did that yesterday, read the directions, entered the local settings, put the phone back in my pocket.  I have to say I was a little disappointed to see I have to tell the app where I am.  Google maps and navigator always know where I am!  And, they were free. But, Thursday I will tell the app I’m in Indianapolis and we’re all set for the weekend.

So, I sent Hamilton to bring in the hanging flower basket tonight.  He brought it in Sunday night, too, before the app went into effect.  Local weather included a freeze warning. 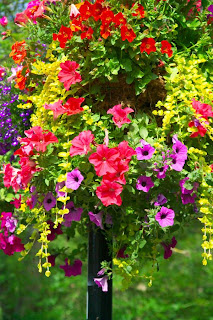 Posted by Joanne Noragon at 9:31 PM