Why the subwoofer is wasted on me 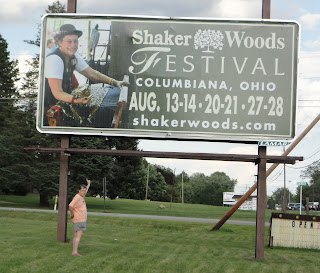 The one with attitude.


I  have less attitude only because I’m shorter.


We’re good friends for a lot of reasons, not the least of which, we have stood together in the aisle of a show and said “May God strike me dead if I ever do this show again.”  That was twenty-five years ago at a show in Harrisburg that will remain nameless.  I may have to write about standing in the same aisle at the same show one other time, ten years later, with Linda, and saying the same thing.


Linda sends me emails about events I should never forget.  As if.  But I see she has no intention of ever starting a blog of her own so I’m happy to tell on us.  She called about something last night that ended in a friendly argument about SPAC.  Of course I was right; my memory is infallible.  I had to send some follow up information by email attachment, so all I put in the header was Ray Charles.  Shorthand for “I’m still right.  Take that!”


I came home from a hard and stressful morning at work (no possibility), and found a return email with a newspaper attached! Header:   James Brown.


SPAC is the Saratoga Performing Arts Center in Saratoga, New York.  They have an annual jazz festival.  There also was, but no longer may be, The Art Show at the jazz festival, a show produced by Vermont Craftproducers and Charley Dooley.  A great venue of shows in southern Vermont and parts of upstate.  I exhibited at the Hildene shows, and at the SPAC jazz festival and others.


The SPAC festival was totally unlike any other show I did.  The grounds were packed with music lovers from the start to the end of the festival.  It was its own little community.  Do not be in the path when the gates opened; you’d be bowled over.  People attending had their own plan for securing prime real estate for the day, which involved sending the fastest runner in first with a blanket or a chest or a chair to stake the claim.  The rest followed in a wave and the temporary housing set up for the day ranged from a blanket on the ground to dining tents with fairy lights and recliners. 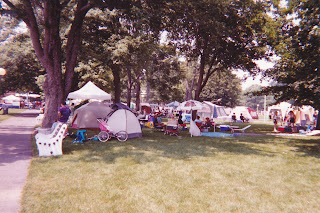 Between sets the Art Tent would be busy; when a headliner performed we had lulls to breathe.  We could not begin loading out until the last performance began on Sunday night, generally after 10:00 pm.  And, quietly, quietly, no disruption to the listening audience.


Linda is a music lover, I guess.  She goes to operas.  She goes to concerts.  She plays the piano.  She likes me in spite of my tin ear and the bucket I can’t carry a tune in.  The waste of all that SPAC jazz on me did bother her no end, though.  She never exhibited at this show, but one year she volunteered to be the roadie so someone could appreciate the venue.  And, I don’t think she believed me about being run down by jazz lovers. But from her side of the tree she took a picture of me on my side of the tree.  We did not get back to the art tent soon enough and the gates had been opened. 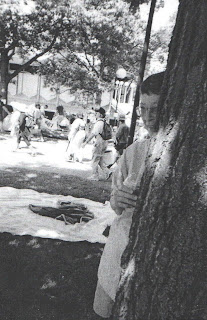 We worked two long hot days at the show, and Linda heard and saw jazz musicians everywhere.  In the big arena, on big screens overhead, break out sessions on wooden platforms all around the grounds.  I think she was in jazz heaven.  It got to be Sunday night, and the headliner started around 10 pm, just as the art show organizers came around and told us to begin quietly packing up to leave.  I was my usual hot, tired, hungry and ready to start the two hour load out.  The headliner was on the big screens and singing away.  I could hear him and if I looked up, see him.  I kept on packing and toting.


Poor Linda.  “I’ll never see him live and in concert again!”  “But we can hear him!”  “No, it’s not the same.”  I kept on packing and toting.  Now she tells the story of the night I wouldn’t let her see James Brown.  “No, Linda, it was Ray Charles.”


On the phone last night she said I needed to write about the James Brown night.  “No, Linda, it was Ray Charles.”  Just to rub it in, I put Ray Charles in my subject line when I forwarded whatever she wanted.


Here’s the newspaper she sent me.  Ray Charles performed on Saturday.  James Brown on Sunday.


Here’s a You Tube tribute to the Godfather of Rock and Roll she sent me.


Linda, you can leave any comment you want, you earned it.  You worked on this one as hard as those fans charging through the gate.  At least I know who Ray Charles is!

Posted by Joanne Noragon at 4:57 PM