I could not have imagined it

In 1979 the president of my company lugged some dirty shop equipment into my office.  “You’re going to learn to use this,” he said.  He was my boss’s boss, so I listened up as he put a no longer beige colored, oversized typewriter on my desk and added an even dirtier TV to the top.  He announced it a computer.  He wasn’t fooling me.  I knew he took it right off a test bench out there in the factory, where the quality control folks poked probes into parts off the line and watched green squiggles on the screens.  Our computer was huge and lived in an air conditioned room.  The manufacturing guys used it; one of the clerks spent part of the day inputting data.  I took a computer class in college and we made punch cards to make a simple program that typed out “The Quick Brown Fox.”  No, he wasn’t fooling me. 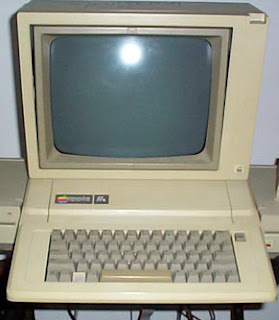 
“Get some Windex and clean it up.  Don’t squirt the keyboard.  I’ll be back with the rest.” 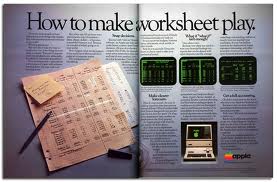 He returned with a box with an instruction book and a 5¼ floppy disc labeled VisiCalc.  I fell right down the rabbit hole.  From that day to this I have never encountered a software manual written with such clarity.  Here’s how to add numbers in this program.  Here’s how to subtract, divide, multiply them.  Put them in columns.  Perform big calculations with them.  Whoops, don’t make a circular reference. Always remember to save your work.  Frequently. /fs.  It was like magic. 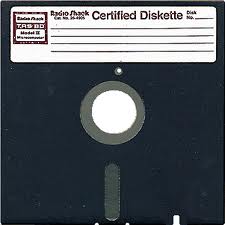 Soon after I found the director of manufacturing looking over my shoulder.  Then the purchasing guy.  Then sales.  I taught them what I knew about VisiCalc and we had a room with a long table with several Apple II’s.  We could carry a box of floppy discs in the room, take a computer and get to work.  We shared operating secrets such as using the reverse side of a disc when the first side filled up.  It made perfect sense; the whole disc was dipped in the same solution, why couldn’t we use the back.  Of course the second side eventually crashed and we went whining to engineering, who sneered at us for using that uncertified side, and recovered the data for us (or not).  Eventually technology caught up; discs became double sided.  Then little hard discs that went in the A drive. We all learned that leaving the monitors on burned the menu screen into the monitor face.  We left the monitors on anyway.  But I’m getting ahead of my 8 bit beginnings.


I’m an accountant.  The nastiest things we dealt with in the olden days were ledgers.  I could just see my twenty eight columns of depreciation schedules on that screen, and started right in.   The queen of the ten key adding machine did some serious tooth gnashing and some muffled swearing over the absurdity of entering numbers from the top of the keyboard.  One day I looked in PC World and there was the nicest little ten key add on key pad.  “It’s not the initial cost, it’s the upkeep,” my boss muttered as he approved my requisition for key pads all around. Then technology went around again and we had keyboards with key pads.  Oh, yes, and separate arrow keys.  Lotus bought VisiCalc.  Computer memories got bigger, computers got smaller.


We got IBM PC’s; we networked; we could reach into the big computer in the air conditioned room and find data we needed for reports.  We could type up our own memos on something called WordStar, instead of finding a secretary to do it for us.  And I got the ledgers I used up and running so lickety split that my boss sent me around consulting for business acquaintances who hadn’t got the hang of computers.


I bought our first home computer shortly into the 1980’s.  A Tandy from RadioShack which cost the enormous sum of $2,000.  I doubt I’ve paid more for the several home computers that replaced it. I discovered ShareWare.  Software advertised in catalogues or in PC magazines.  I found my first accounting program that way, FinanceManager.  It became Bottom Line Accounting, which carried Jan’s and my business for years until I finally made my tax accountant happy and switched to the ubiquitous QuickBooks.  I prefer to call it QuackBooks.


Last fall I sucked it up and upgraded to my first new computer since Y2K, learned Windows 7, the new Word and Excel.  About a month ago my sister replaced her computer.  It doesn’t even have a tower. My kids do it all on their smart phones.  I could not have imagined any of this thirty odd years ago, when Frank put that dirty piece of shop equipment on my clean desk.
Posted by Joanne Noragon at 5:27 PM