When Jan and I went looking twenty odd years ago for a house with a studio we looked at a lot of properties.  It was quite the slog through northeast Ohio.  “Outbuilding” turned out to be house trailers scattered around.  “Near turnpike” was actually under it.  Imagine the noise!  One beauty was feet from the Cuyahoga River.  I imagine there were several hundred feet of front lawn when the house was built.


Jan did a drive by of this house on the way back from an afternoon of house hunting and called me the minute she was back in Akron.  The street actually was on her way home, before the highway was built.  She told me it might be the one and seemed to be Poppy approved; he’d barked as soon as she turned into the street.


I arranged with the realtor to see it the next day.  We came up the front steps into a foyer and through another door into a tiny living room and through that to The Studio.  A room empty except for a pulpit and a wood burner.  A huge room.  The two young men of the house were home, one was at my elbow.  “How much is this house?” First words out of my mouth.  My realtor jumped in, “We don’t do it this way.”  So, we suffered a complete tour of the house we wanted.  A small house with a big empty room.  In need of a total renovation.  Except for the big room.  We bought it from the parents of the two young men. 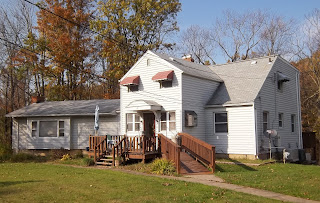 Making that big room into a weaving studio and then a quilting studio has been another serendipitous chapter in the life of this house.  Only three families have lived here, and every child who lived here has come back to visit the house and share some memories with us.


The house was built in 1940 by a man named Amity.  He called it Amity Acres and liked it so much he put a sign announcing the name up on the corner.  Way before zoning in the township, but the trustees asked him to remove the sign, and he did.  His son, who was twelve when his dad bought the property to build the house has stopped by twice to look over the old place.  He helped his dad dig the basement and build the house. He brought his half brother, who was seven when the house was built, the second time he stopped.  He told us his dad was an old skinflint who taped newspapers to the windows not to buy curtains.  He certainly built a sturdy house.


Originally the house was an old cape cod style, four rooms on the first floor and a finished attic that was made into a suite under the eaves for his grandparents. The grandparents didn’t like the accommodations, so it was a rental unit until the house was sold.  His dad did add the front foyer which allowed for another room under the front eaves.  There were two front entrances to the house, one for the upstairs apartment.  When we bought the house the two front entrance doors remained, and there was an entrance to the very steep stairwell from the living room, too.


The next family also lived here twenty some years and raised two boys and a girl.  The father was a contractor and a lay minister.  The father built the addition as a gathering room.  The Fisher wood stove at the end of the room remains the only source of heat in the room.  We’ve heard about that from people who gathered here!  The two boys, Matt and Adam, intended to purchase the house from their parents, but it didn’t work out.  I think Matt’s fiancée really wanted a home of her own.  It was perfect for us.


After some work.  We had to upgrade the electric, the plumbing, septic, replace the bathrooms.  We tore down the wall to the foyer and the staircase,  to make a small room look larger.  We replaced the steep staircase to the upstairs with normal steps.  The steep stairs to the basement couldn’t be adjusted, so they remain.  We redid the kitchen.  New wallboard and paint and wallpaper everywhere.   Tore up five different kinds of carpet and refinished the original oak flooring.  About 15 years ago the roof of the back end of the house was pushed up.


The outside was several colors of yellow, so new siding went up with the initial remodel.  That was when we noticed Matt’s red truck going down the hill and coming back up (dead end road), so we waved him down and gave him a tour.  He was pleased with the changes.  He admitted he had been concerned, but he approved. He brought his new wife.  Months later he appeared with his sister and her children, asking if it wouldn’t be too much trouble…………So, we gave her a tour.  In the front bedroom she told her children, “This is where I laid on my bed on Friday night and watched for your dad to come down the street.”  She and Matt had a little consultation and then asked if they could bring their parents the next time they were in town.  Apparently having a contractor for a husband/parent is a little like being the shoemaker’s child.  Their mom’s kitchen cupboards had been on the floor in the gathering room until Matt and Adam put them up just before they put the house on the market.  They thought their mom might like to see how the house turned out.


When the parents were brought to inspect the work, the mother was quite shy at first, but the dad was plenty jolly and they took a grand tour.  At the end the mother said, “I could have had a house like this all along.”  The dad reminded her they had retired to a nice little house, she agreed, and said she was pleased and happy with our work.


That visit was years ago.  But over the summer another family came to the door.  It was Adam, his wife and his two teen age daughters.  The women were shy and even embarrassed, but Adam seemed like he needed to be there.  He noted the changes to the living room, but was drawn to the studio.  I explained to his girls the room had only a pulpit when we first saw it and was perfect.  Adam told them this was where his ministry had begun.


As they were leaving I pointed out the fossil in the fireplace to the girls.  Adam had never noticed it in twenty years.  Tom Amity had told me his dad had split every stone for the fireplace and just that one fossil had turned up.   He told me he figured it was a crustacean, like his dad.  It’s probably a trilobite, but I have trouble remembering that when I think about a crusty dad. 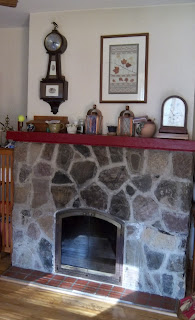 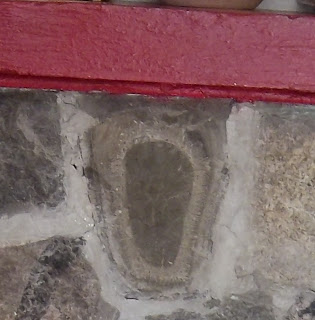 Fossil on the right 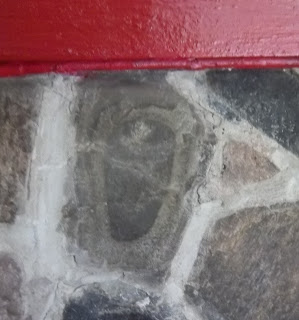 Fossil on the left
Posted by Joanne Noragon at 11:27 AM

Email ThisBlogThis!Share to TwitterShare to FacebookShare to Pinterest
Labels: our house