Stuck for a title, but a lot to write about

I've been in my new home for three weeks, I think. I'm no good at that sort of calculation. And, my new glasses need some serious adjusting! I wonder why that fact sprang into my head as a factor. I just wrestled with the calendar and concluded Saturday, September 30th  was the two week anniversary, and I can add the weeks since then. Or, I moved four weeks ago, and am quite settled (easy enough in three hundred odd square feet and divested of a reasonable amount of furniture).

Today is a beautiful day with sunshine through the cat's window. No cat, yet, but it's definitely on my mind. The rules say I need a pet  deposit of $250. We all know how well the rules are implemented here. 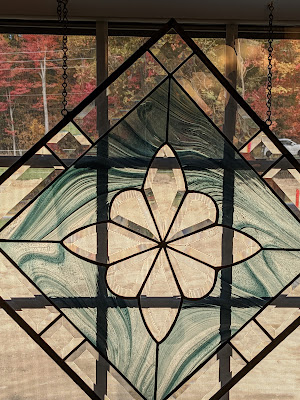 For instance, residents are issued a call button immediately on moving in. Mine was several days in appearing and in that time I  was locked out, without the button and without a phone. I had to be very cautious about doors, for outside doors are locked at 5:00 p.m.

I found it an amusing adventure, finding things to hold to as I worked my way (hopefully) to the reception area, through a very large building with two atriums that could be indoors or outdoors.

But back to the present! My little bottle of quarters took quite the hit on Friday, the only day I was able to play. I won the first game, but so few of us had appeared I barely broke even, and it was downhill from there. The players had a good time joshing they finally had stopped the new girl from wiping them out!

Beth works just a short distance from here, making impromptu visits a pleasant option, if it weren't for the five p.m. door problem. All outside doors are kept locked at all times except the front door, which is staffed at all times.

Most "independent" residents come and go at all times, so the outside doors are accessible by a key pad code. Here is the emergency exit plan for my section of the second floor. 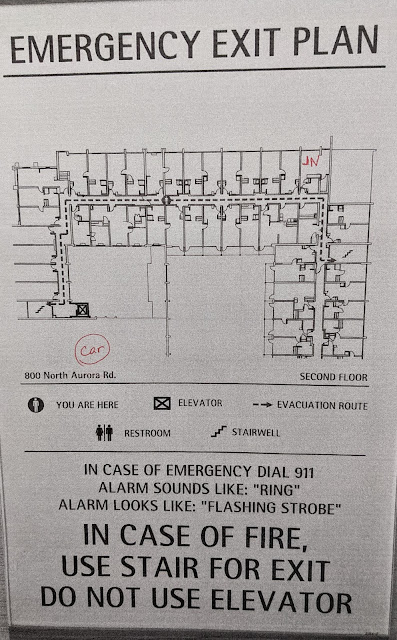 I sized this "extra-large" to highlight details. There I am in room JN. The details are completely discernable; the hall into the living area, the closet/bedroom. The large square to the right on entering is my bathroom, and a small closet. The diagonal area is my kitchen; refrigerator, sink, counter, stove top.

To use the elevator on a normal day, I turn right down the long hall, then left to the end. There are three more apartments here and the stairs or the elevator at the end of the hall. There is another diagram on the first floor to indicate the exit.

The notation "car" indicates the direction the car's parking lot. The stairwell/elevator on this first floor exit into a hallway to more rooms and via short halls to North Aurora Road parking lots. The smaller hall leads to the pool, an atrium, the Bistro, the dining hall, the library.

Posted by Joanne Noragon at 8:37 AM
Email ThisBlogThis!Share to TwitterShare to FacebookShare to Pinterest