Actually, it is nearly the end of another week. The activity I booked most of the week has been sleep. So the list of cat attributes include some fussing about and some talking.

Jan and Tom just left. I bought a mat for under my desk chair. It came rolled into a tight club. I began the unroll by putting it on the heater. The directions suggested a hair dryer and I settled for the biggest air dryer I could see. When I came back, the mat was on the floor and a little unrolled. It spent the week under a movable chair and today it was disposed of. 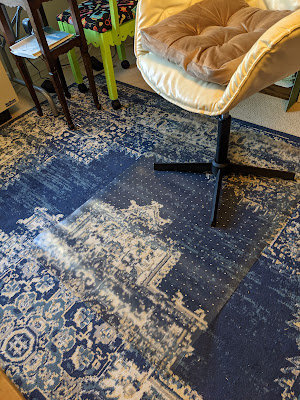 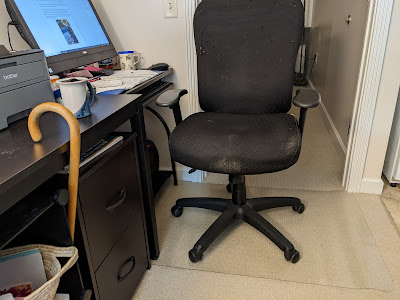 Here it is where it belongs, under the desk chair, secured by the desk legs. My glass is back in a window (the cat's window): Here is the other set of windows, over on the weaving half (or more) of the room. 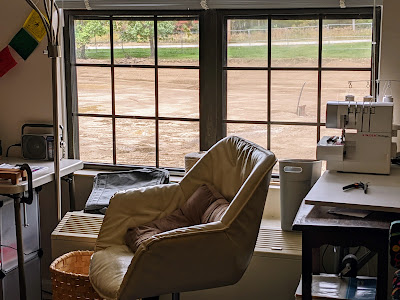 You can see something muddy outside that window. The mud is from raining every night, and sometimes during the day. That has not deterred big bulldozers and little cat units which have been shifting dirt every day.
I've watched them bury a big concrete pillar, fasten a pipe to it and another pipe and pillar the other end and so on. Come next spring they may have another set of independent living units, with gardens, built.
A final "me" note of interest, and I'm outta here. I had a haircut. There are two hair dressers here and I decided what the heck. Nothing ventured, nothing gained. The Friday hair dresser is Sue. 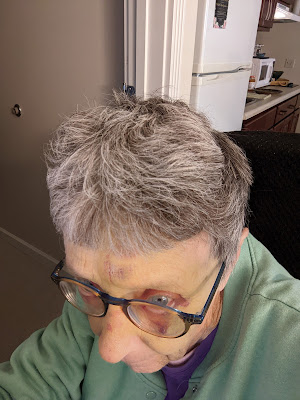 The Saturday cutter is Audrey. When this interesting razor cut has been exhausted, I'll give Audrey a go. 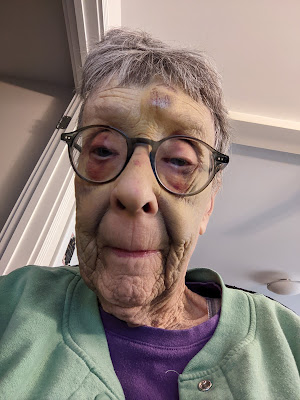 No one knew I had such a large bruise when all the fluff covered it.

Posted by Joanne Noragon at 12:52 PM
Email ThisBlogThis!Share to TwitterShare to FacebookShare to Pinterest