Barn swallows and wrens and other news

I looked up from my knitting the other day and through the window saw a tiny house wren on the rail, looking at me. Fascinated, I held its gaze for many long seconds. I blinked and it was gone. Here's a picture I borrowed from the web: 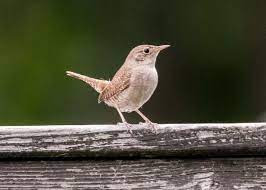 I picked this picture because it looks like my railing and my wren. Why do I like them so? That perky little tail; the stance, ready to take on the world. The little fledglings, as jaunty as their parents. And, I've missed them. After a steady diet of sparrows and the occasional chickadee, it's good to come back to a variety of birds. Sadly, there are not so many varieties without the feeders up. But apparently there still is a male wren, supervising half a dozen nests.

This past weekend was the third Peninsula Flea. The weather was perfect. Low eighties, good traffic, decent sales, good company with Beth, my daughter and wing man.

At the show last weekend I saw a barn swallow enter a nest on a beam. There was a long twig hanging down, but I could not direct Beth's eyes to it.

Yesterday the swallow flew into the barn, circled a couple of times, weaving through the rafters like a stunt plane. This time Beth saw it and where it entered its nest. Later in the day I saw the swallow fly from the nest, but only clear a couple of rafters before it settled on a rope and stayed. Fortunately it was between exhibitors, because as it settled and surveyed us, there were the inevitable droppings.

I've never seen swallows except at Ann's. Those were dark, front and back, so that was a swallow, as I understood them. Suddenly the barn swallow turned around to face us, and I was dumbfounded by its pristine waistcoat. Here's another picture borrowed from the web: 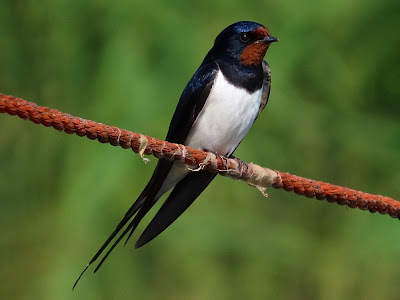 I'm doing five shows this summer. Three are done, two left, one in August, one in September. I agreed last January to do all five because I expected to be in much better physical shape by summer. Though I've been able to keep up my inventory, I have not defeated the arthritis in my right hip. I will overcome, the question is when.

With that in mind, I've made several decisions on going forward. First I will not do shows next summer unless I am as pain free as last year, when I did the final couple of shows alone. Beth does not want to do this next year, and I don't blame her. She has sacrificed five good Saturday's to help her mother, and I appreciate it more than I can say.

Next, I will improve my web site. It has begun well enough, with Blake's help, but he's busy with his life, and has been stumped by a couple of my requests. To that end, I have an interview Tuesday with a recommended web designer. We'll see what happens.

And finally, I will not increase my prices this year. I probably will not increase prices until Covid is controlled and all fifty states have women's rights on their books and/or in their constitutions. That includes my state, Ohio.

Have a safe and happy July 4th celebration. Get back to redressing the past and improving the future on July 5th.

Posted by Joanne Noragon at 10:30 AM
Email ThisBlogThis!Share to TwitterShare to FacebookShare to Pinterest