Picking up where I left off, I had a loom to tie on. I even posted a picture of eleven bouts, ready to tie on. 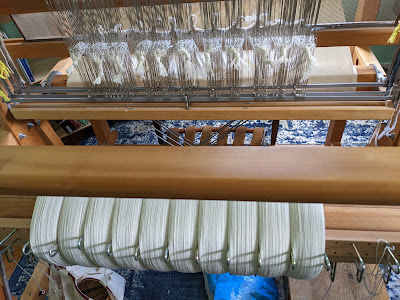 Today I began. Why today? It's Thursday, for crying out loud. What kept you busy Sunday, Monday, Tuesday, Wednesday?

I was sick. Sick. S.I.C.K. I remember saying to someone, "I'm not getting anything done! And I didn't! I slept. I sat in the recliner, totally upright. I slept. And so on.

There is only one way to solve this problem, and that is to wind on the last section. I called Jan. Now we understand why so few tubes of thread ran out. She did remind me that she was not in charge of counting.

I promised that when she arrives on Saturday, the entire set up will be returned to its Saturday state, like we just took a break! I probably will spend much of tomorrow getting that job done.

There was ample company this week. First, way outside my window, a wabbit. I sat on the bed for a long time, watching it enjoy breakfast. I've seen it before, sans a companion or baby rabbits. It seems quite alone. 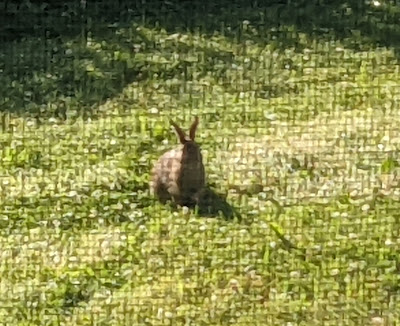 And in my window, on the screen, a long-legs. He needs to pay attention, the robins often land on the screen. 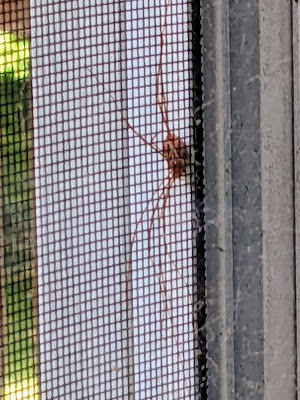 And on the threshold, this moth. I do not recognize it at all. 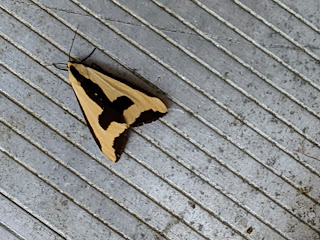 So, back to it. I've a lot of thread to cut and tape down. The beam  cannot be turned in its current state.

Posted by Joanne Noragon at 8:10 PM
Email ThisBlogThis!Share to TwitterShare to FacebookShare to Pinterest