There are benefits to a small town and friendly people. I had a slip of paper in the mail box, addressed to me at the trailer, but delivered to my new street address. Bless their hearts. It was a notification of a certified letter at the post office. I thought about it all day yesterday, and the only folks I thought still might not know my new address were the owners of the trailer park itself, off in New Jersey. So, today I went to the post office and signed my name.

It was a letter from the Ohio Department of Taxation, informing me Everything Old is New Again had not filed for the last half of last year, and consequently owed six hundred odd dollars.  I remember little of what I did when I returned from rehab, but I was pretty sure I'd paid sales taxes collected last year.

I signed on to the Department's new and improved (?) web site, and noodled until I found "History". There it was, the top entry. I'd paid the ninety odd dollars collected--on January 7th of this year. Seven days after I'd collected any money and eight days before it was due, and fresh off a broken femur (though they wouldn't care about that).

So, I wrote a letter, which I'll mail when I next go out. I probably could resolve it somewhere on the web site, but I'm still an analog mind in a digital world. I don't care how long it stretches out; I paid the money due.

I planted the mandevilla, as ever. The white, pink and salmon have been blooming profusely, but the red took its good time. It finally opened a flower yesterday, so on the way to the post office I took pictures. The red is the last picture. 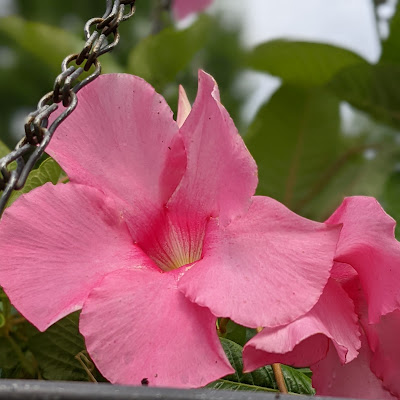 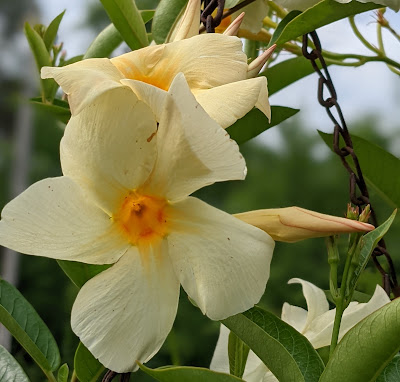 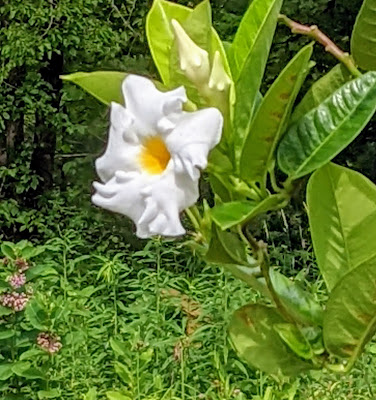 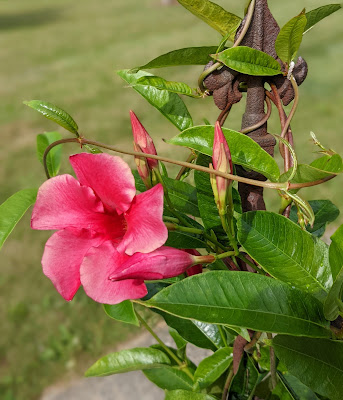 The red mandevilla. It looks more pink. Look to the far left of the white mandevilla and see the milkweed in bloom. We planted that from seed, and found a tiny praying mantis over the weekend. You can't have one without the other.
Posted by Joanne Noragon at 11:42 AM
Email ThisBlogThis!Share to TwitterShare to FacebookShare to Pinterest