It can only improve

I have barely blogged over the last six months. I think my output from flat on my back to rehab the broken fibula was higher than my current production. The truth is, it has little to do with producing towels and everything to do with pain.

My lower back has hurt for years, since I crushed T1 and 2, lifting a case of copy paper. I've come to terms with that; it slowed me way down, but never stopped me. I broke my tibia a few years ago. And both shoulders. And my fibula.  They merely added a cane to my repertoire.

What hurts now? This is such a cheap shot by my body that I am disgusted. The Iliotibial band in my right leg! Since I came back from rehab last December and started physical therapy, it hurts me so much I cannot swing my right leg.

I've bounced from doctor to doctor like a pinball, trying to find answers and solutions. I've had three or four steroid injections. I've quit physical therapy; I'm only wasting their time and mine. At least I know the problem, thanks to the physical therapists.

I will ask for a new bone density test soon, after that horrid infusion of Reclast last March. Beth says if mine is improved, she'll take her doctor's advice to take Fosamax. So, end of the big whine. I want this to end and figure if I stand up and scream as my last resort, it will change.

In the meantime, I finally put my knitting ability back in gear and finished a pair of socks that have been languishing on the needle for two to three years. Actually, the first sock languished. I finished it last week, knit the second and immediately passed them along.

Why? Because my youngest granddaughter, Caroline, is going to college in the fall. In...Minnesota. I started a sweater for her, from a pattern I've used for ages. 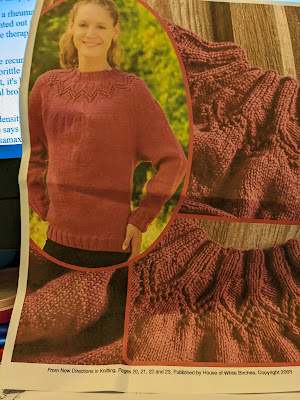 It needs its sleeves begun much sooner, to eliminate so much underarm fabric, and probably made several inches shorter. Sweaters aren't that long these days. 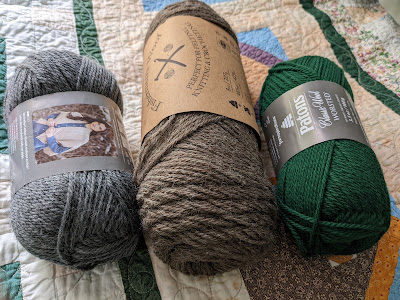 Then I have these three skeins, looking like winter in Minnesota to me. This is a tossup. A nice rugby type, or a Nordic?

Posted by Joanne Noragon at 4:08 PM
Email ThisBlogThis!Share to TwitterShare to FacebookShare to Pinterest