Analog mind in a digital world

When I bought the new car, the salesman set some of the "buttons" on the dash. Actually, there are no buttons, just screen after screen of digital information. I saw the clock go by. It was round. In a flash the young salesman had changed it to digital.

"Wait, wait! What did I just see. Is that an analog clock?" He flipped back; it was. I have an analog clock on my dash. You can have your fifteens! I understand quarters.

This all came about because Beth and I were chatting at the show today. I asked her to look at my radio and see why it wouldn't stay on the hard to find NPR station. She said "What button do you want it on?" and went off to my car. I was ecstatic. NPR would have a button.

When she came back she said it was fixed; I had somehow set the radio to AM. When I came home, I looked at the dash. There are no buttons. The damn thing is digital as hell. However, when I turned on the radio, it was on NPR. Off. On. NPR. I won't ask.

The show today was not very successful; my sales were off by more than half. It was very hot; traffic was low. It seems the better part of discretion was staying home today, and so they did. Although it was mid nineties, and "feels like" probably exceeded that, we were comfortable in the back of the barn until half an hour before quitting time. 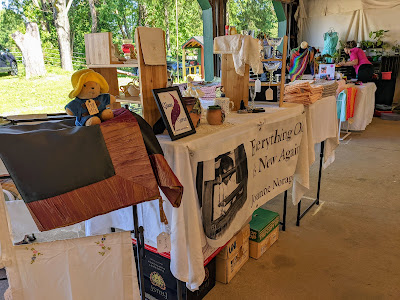 One other vendor stopped to chat the dismal sales today and said she has been concerned that inflation would impact sales. Food and gas are more and more expensive; money for non essentials will dry up. I'm not ready to admit that yet. I sold though the dot com period and Bush's bank and housing debacle, so I'll hold judgement for a bit. 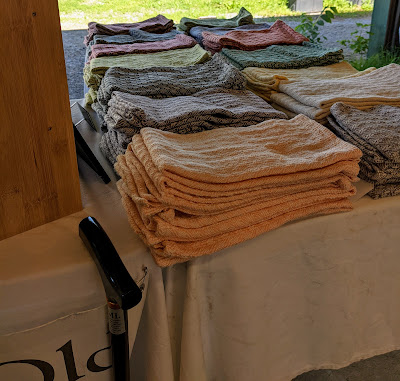 As for that first of several tragedies about to emanate from the highest court of the land, I refuse to rant and rail. This is the culmination of the majority of voters who could go to the polls, over my life time, staying home.

The only way to regain liberty and the pursuit of happiness is to vote. I do advocate encouraging voters to vote. I hope they wake up.

Posted by Joanne Noragon at 8:03 PM
Email ThisBlogThis!Share to TwitterShare to FacebookShare to Pinterest