Another weekend, boredrome and doldrums. No excitement except self induced! I seem to have a bye week of therapy, though my roommate has been severely tasked!

So, here is the lucky break! My 23 year old hip replacement seems not even to have shifted! But the femur with the big pin took quite the hit! 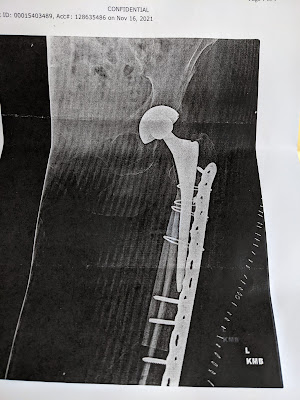 That's the inside. Here is the outside, when I was brought to Regina after surgery. The 80 staples were a bit of an exaggeration. More like 60'ish. 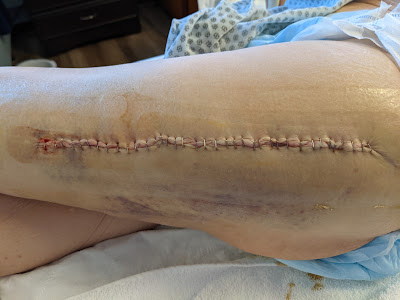 Plus a helluva bruise. The head wound care nuse and his cohorts have taken dandy fun in caring for it. They said "No drainage, no dressing!" But they were in there daily, changing the dressing. Tim, the wound specialist, was extremly careful to expose the minimum skin to adhesive; I'm allergic!
There was a small (?) intercinine squabble when he gave the patient care supevisor permission for two nursing students to partially remove his bandage and learn what she could teach them from the wound.
Ignoring my pleas to go easy, off came the tape, woosh! PCS asked what to do next. "Clean and dress!" the excited reply. I asked if they had an order to do so. PCS swooped down and dished non stop instructions, including a very painful antiseptic. I asked several times if this were in the order; no response.
When the wound care fellow appeared next day, his reaction was not happy. A bit of skin was removed with the bandage. He said he was sorry I'd allowd this to happen. He got my version, plus the krap they foisted onto my feet to prevent pressure sores, to which I had an adverse reaction and two aids spent an hour scrubbing away, not successfully.
He excused himself mid redressing. He came back half an hour later and told me the PCS nor her students were permitted in my room again! So far, so good. 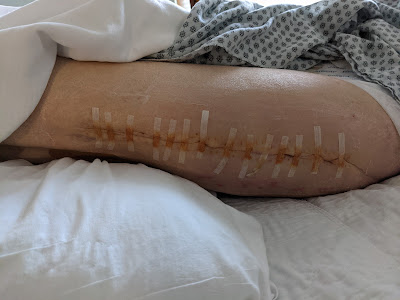 So here we are in steri-strips, to fall off as they may. No drainage, no dressing! 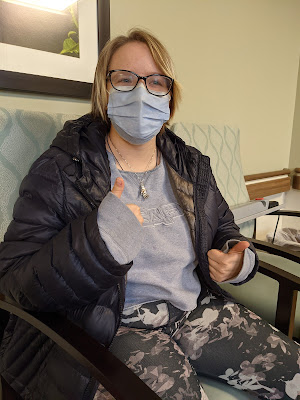 Laura came to visit today. She brought me a new book, "The Boys", to swap for "State of Terror" by Hilary Rodham Clinton and Louise Penny. Though no fan of mysteries by any except Agatha  Christie, I must give the book a "Not Bad." I really have little for comparison!
Posted by Joanne Noragon at 3:02 PM