Yesterday I made an uncomfortable ride to the doctor's office for staple removal. More than fifty. I quit counting. The left leg remains non weight bearing for the next four weeks, when I'll be reevaluated. The femur is one long bone to repair!
Between then and now, my job is to become strong and easy on my non-dominate right leg! I wish I were Ruth Bader Ginsburg.
In the meantime, let's be food critics! 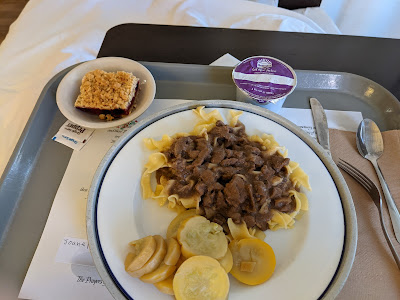 This was called beef stroganoff with summer squash. The noodles were dry and sticky, the squash boiled to mush with the hide of a rhino. The dessertwas good for two bites before the sugar overwhelmed. 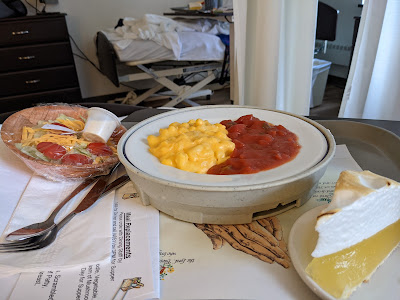 This is called mac and cheese with stewed tomatoes. Good old Kraft mac and cheese that has been foisted on the world's children. The "salad" is iceburg lettuce, shredded one sixteenth inch wide. It's like chewing green hacksaw blades. I've given it two chances, and the cherry tomatoes three. One more for laughs? 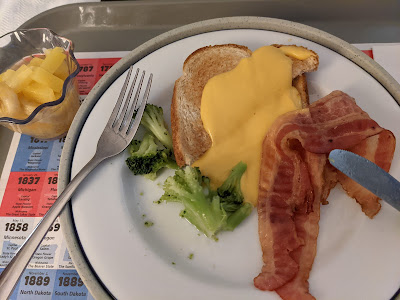 "Welsh rarebit" with steamed brocolli and decent bacon. Let's hear it for that mainstay of American cuisine,
American cheese.
For all that gripeing, I am making progress. I'll tell you next time.
Posted by Joanne Noragon at 11:54 AM
Email ThisBlogThis!Share to TwitterShare to FacebookShare to Pinterest