Not much to say

I'm here, and unpacked. I've found the pie bird and the night light. Who could ask for anything more?  I could... Three weeks since the one block move occurred.

Unpacking was not as straightforward as packing. I moved into two rooms, not three. Many boxes labelled Kitchen are now on the shelving in the laundry room, labelled Laura. More should meet the same fate, but not now.

In the beginning I unpacked for an hour and took an hour nap. It worked well, until I got the courage to work for two hours, then three or four, and move around some furniture, and some other occupations of moving.

Somehow, I've hurt myself, enough to warrant a trip to the ER, then to a new primary care physician, and now a referral to a hip specialist, with notation of hip replacement. The only good news that I have to infuse (to quote an Irish anti-English song) is that I called the department, read the strange words and numbers off the referral slip and heard the scheduler say "We must get you in within two days." And so they did. Tomorrow I meet a specialist to begin the discussion.

This hip problem has been ongoing, cumulative. I did not move anything too big, shift anything too heavy. It's the result of doing anything at all. The good news is, my friends who had hip replacements recently were sent home the same day, though in a good amount of pain. But that's ahead of myself; I may get off with a nice big shot of cortisone!

More good news: Laura turned on 125 turns of warp a couple of weeks ago and I sat and tied it and pulled through the warp. Then I quit for a time, until I met the new primary care and was given a script for a heavy duty ibuprophen and the referral. I should not be taking the ibuprophen, so it's to the new ortho fellow to get me past it very soon.

I am weaving about an hour a day. Right now it's a lavender, and quite nice. 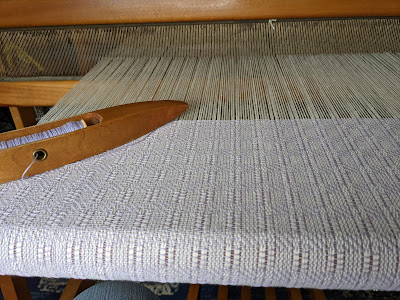 And now there's a nap coming on. I'll report back soon with all the news fit to print.

Posted by Joanne Noragon at 2:06 PM