Much to do and doing little!

I wore myself out yesterday. Beth and I picked out some new TV dinners. Are they even called that any more? She did my laundry and changed the bed. Clean sheets, what a treat.

I managed to weave one bobbin yesterday. Today was much better; I did at least two and perhaps three. That was after an auxiliary nap, from nine to noon. I woke up at three and spent the better part of the next four hours replanting the flower gardens. They do need it, but I put in a tiresome amount of effort last night. 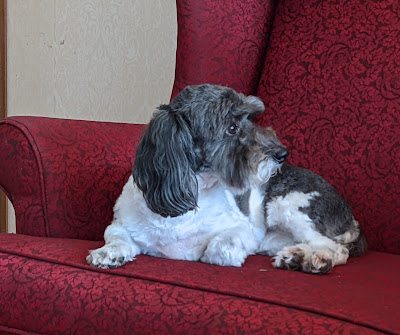 Kai supervises much of what I do. I really don't believe she's found a gold mine of food bits on the floor, but several times a day she checks. Today she investigated the legs of all my furniture. That was a mystery.

Laura made a surprise visit today. She was working a food truck at the Community Days of a local township, and came by to relax a bit. She said there were two food trucks and only one served fries--the one she was staffing. "I'm so tired," she announced after awhile, rubbing her eyes. "If I rub enough I probably can see straight."

"If you go wash the French fry residue from your glasses, you can see perfectly!" I told her. She did, and was well enough to go shopping with K. 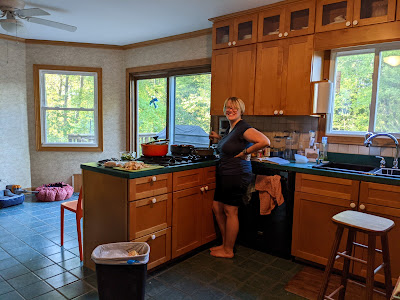 They went to the Indian market in Akron. Here she is making up supper for the two of them. I have no idea what it is. Once she ran into the bathroom for tissues for her eyes, streaming from onions.

Posted by Joanne Noragon at 7:04 PM