I went to town this morning, in drizzling rain. Cold, drizzling, if you want to count forties cold. We'll even be above fifty this week.

The climate is happening too fast. I think we need to fix terra firma before we colonize Mars. I also think, it won't be my problem. I'll just keep eating root veggies and beans, and recycling. My trash would be a bag a month if I weren't scooping kitty litter. One little brown paper bag a day of litter fills my trash can by week's end.

Oh, and I still eat bacon, but only half a pound a month. And I could quit that, maybe.

So where was I? Drizzling rain, and looking for the heron at the pond. I've seen it (I just backspaced through 'him', though I'm real sure he's a him) several times these last six months. The golf course is looking really skanky these days, but no heron, no incentive to stop in the drizzling rain for a picture.

I had a big afternoon ahead of me, clearing out last year's files, shredding, new files. When I came in from the drizzling rain, I looked at the bowl of apples and resolved, after lunch, The Pie.

That recipe claims to take an hour and a half of one's precious time, and an entire hour is devoted to baking. This time around I did limit myself to six apples, but it takes me half an hour, plus to peel six apples. Eventually I put it in the oven. 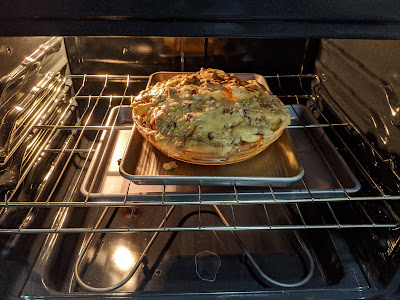 In an hour I put it on the counter, to cool. It smelled as good cooling for another couple of hours as it did baking. 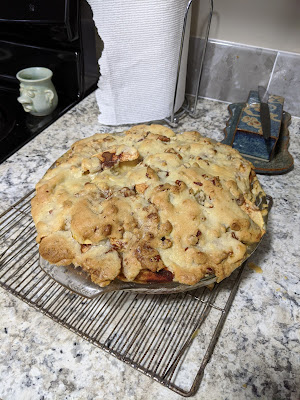 I can tell you, any little bits of crust that chip off should be approached cautiously. They remain at three hundred odd degrees for longer than a few seconds there on the rack.