Much as I like cooking, there are countless drawbacks, and the two worst of them involve arthritis of the hands and crushed vertebrae of the lower spine.

The faster I'm off my feet, the better the back. But my hands don't work quickly and efficiently, like the old days. Worse yet, thinly sliced whatever comes out great chunks. So does finely chopped.

I've tried some "solutions". My sister gave me a beautiful knife that must be hand washed, its tempered steel is that sensitive. I can't control it well enough for fast chopping, and even drove the tip of it across a pad of my palm. Fortunately I learned butterfly bandages way back in Y Camp.

I bought something with sharp plastic blades to push against the chopees. Exhausting and ineffectual. I used to have a little bladed machine that whipped through onions and stuff. I couldn't make it work, so I sent it home with Laura. My hands might be strong enough now, but, damn, they hurt.

Internet perusal led me to a little machine like that, only people powered, no cord involved. The reviews were rave or bah-humbug. The bah's were mostly that it had to be hand washed and it's too complicated to understand. 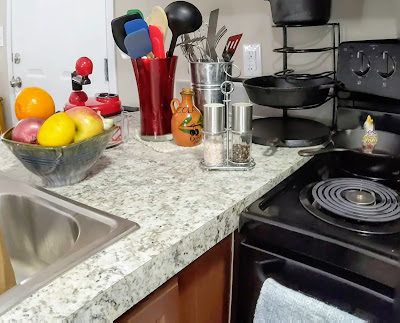 That's it, back there with the red handle. I like it well enough to give it a semi permanent place on the counter. The handle looks like a game controller.

Last night I decimated two scallions, white then green, four cloves of garlic and a half a cup of finely diced onions. When I cleaned up after supper, I rinsed all the parts of my chopper and left it draining on the counter.

I did cut myself! It came with blade guards on the three blades. I jammed the back edge of the first blade guard removal well into my thumb. I'm still wearing that butterfly bandage. 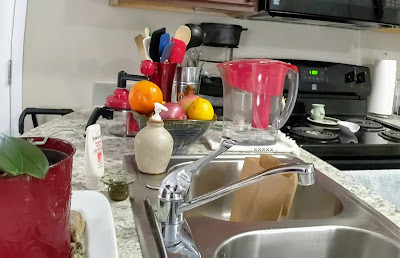 Posted by Joanne Noragon at 8:12 PM