Cook according to waffle iron instructions.

This made ten waffles. I did not scrape the last half cup of batter out of the bowl.

The table was lovely, with three plates with waffles, butter, the maple syrup jug. Jim and Lynn had orange juice and milk. I had coffee. No pictures happened.

Lynn said to me to please not be offended, but she had maple syrup once and did not like it. It was too thin and watery and not sweet at all. I forget what she compared it to, but it was not favorable. So, she would use Jim's sugar free syrup.

I put the little jug of warm syrup on the table.

"That sure smells good," she said. She tried a waffle hole full. Instant convert to maple syrup.

I told her it was just maple syrup. You know, the stuff they make in Geauga County every spring.

I asked where she had maple syrup. "Cracker Barrel," she said.

I did get up an hour early this morning, to commence my cooking duties. I opened the egg carton, and to my surprise, they were every egg color. I did take a picture of a blue egg. 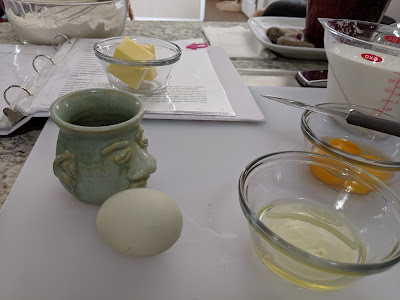 I don't know if you can tell it's blue. I used my egg separator, the fellow with the accommodating nose. It didn't work well. Since I no longer trust myself with the standard, egg shell to egg shell method, I guess a real egg separator will go on the shopping list.

Since I had to go back in the kitchen for the recipe, I took a couple more pictures. 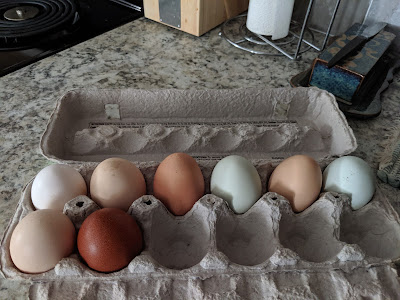 Aren't they pretty. And since I'm mostly proud of my state, here is one last picture: 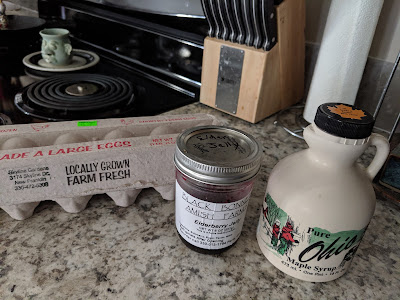 Black Bonnett Amish Farm Elderberry Jelly is also fabulous, and you can take that from someone who grew elderberries and made jelly for twenty years.

Posted by Joanne Noragon at 7:35 PM