I'm worn out today. I started the day with the grocery store. I get up early enough to start my days early, but out and about still is a low priority activity. However, I really wanted to make stuffed shells, and needed all the fixins, plus some more containers to freeze the extra portions.

First stop the container store, second the grocery store. The good news, it was early enough in the morning to have the stores to myself. Bad news, no giant shells. I settled for giant rigatoni, not so easy to stuff with stuff.

Worse yet, I stood so long at the counter stuffing, my back is in screaming pain. That's just something I must deal with, and the solution is a trip to the thrift store for a bar stool (with back!) to use at the counter for long, tedious tasks. Soon, I think. 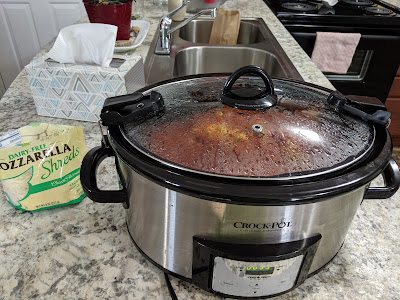 Almost ready. When the timer buzzes, I'll take off the lid and let it start cooling.

My cat has yet to forgive me for leaving him for a week. 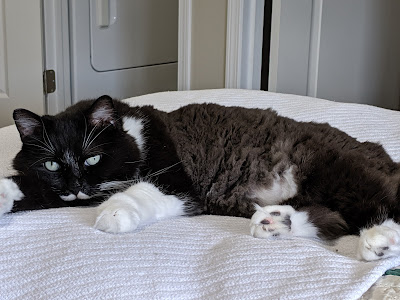 But rather than glare at me most of the day, he's playing big cat, little cat. I'm the big cat, and he spends the day annoying me. If I sit down, he's into the chair. If I lie down, he's beside me.

None of his toys hold his interest, so I bought a new toy. The online videos show kittens and young cats beating the snot out of this toy. There are three levels, and three inextractable balls go round and round. All the video cats are on the hunt for the balls, around and around. 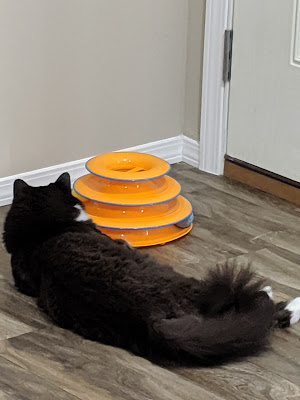 Mr. Cat has demonstrated the ability to pin all three balls at once, look over his shoulder and telepath his opinion, "Is that all ya got, big cat?"