Some more of my week

The plum (?) tree outside the Methodist church is in flower. Nancy and I led Tuesday, until the last hand, when we were swept away by their massive meld. 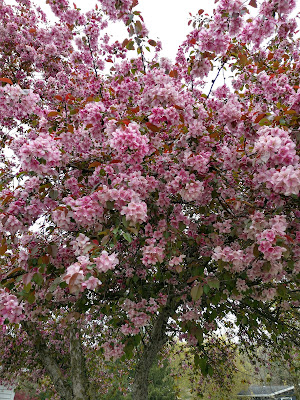 The week commenced rather coolly, daytime highs barely reaching the sixties, before disappearing. Yesterday Ruth and I took advantage of a fabulously beautiful day to go to Caroline's school and watch her team play its last softball game of the year.

At Ruth's house, mid afternoon and temperatures up to the eighties, I stripped down to one shirt. I tied the hoodie around my waist, just in case. As we sat in the bleachers and cheered the girls, the weather changed literally on a walk off walk.

We watched it coming, coming, coming, and the big rain started and the temperature dropped thirty degrees in the time it took to  walk fairly quickly the hundred feet to the car. Such a storm! 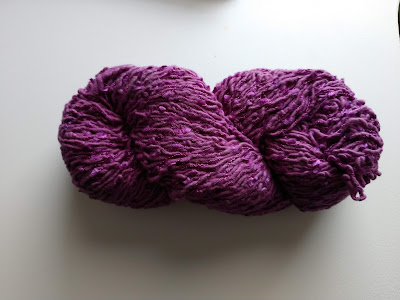 Back home I began to work on a new project. I bought a skein of cotton yarn, plied with a fine synthetic boucle.  It is the boucle that makes an otherwise nondescript strand of cotton appear so crinkly and interesting. 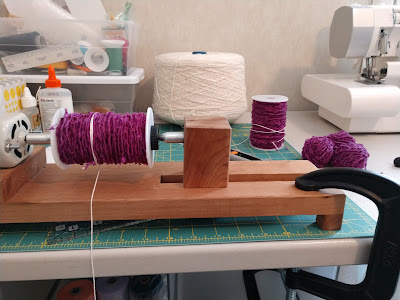 I calculated enough yardage to put fifteen yards in each of eleven bouts on the loom, and that much at least is working out. I spent the rest of yesterday and most of today putting the fifteen yards on each bout. I've never warped this way, mathematically. Once there were eleven little balls of purple to put on bobbins, my work was over, theoretically. 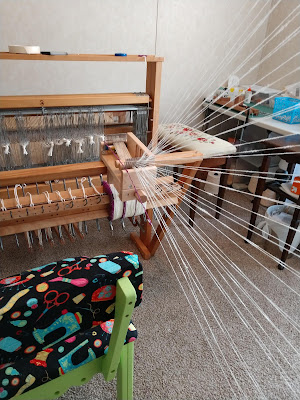 I merely turned the beam and wound until each fifteen yards of purple was beamed on. A good idea, except I cannot recommend it for boucle yarns. I have figured out how not to have the little bumps catch in the tension box reeds, but it still must go through the heddle eyes and beater bar reed.  We'll see.