Either I am catching some thing or all the damn pollen is choking me. Neither is acceptable! I also find it of great interest that I mentally am able to handle this packing business, but physically, not so much. My formerly broken leg still hurts, then there is the matter of the knees needing replacements. I still manage to pack another box or two per day, and get most of them out to “central box staging” in the living room.

This morning I went to breakfast with delightful friends. One of those marriages made in heaven, wherein Jim not only does the shopping, he does the cooking! Lynn does the mopping up. And they seem to eat most every meal out!

We went to a favorite dive of theirs in Kenmore. Going anywhere with the two of them is like a scene from Driving Miss Daisy. Getting to Kenmore could be a short run on the freeway, or the scenic route through downtown Akron, currently in the midst of its version of A Big Dig. Since we all three are Akron kids, it’s memory lane passing the rehabbed buildings.

Central Planning is installing a couple of roundabouts in sacred old Main Street. The two of them thought roundabouts are sacrilege, so I sang my praises of them, and we no longer entertain roundabouts.

I did have a burning question for Jim. How much is a pound of butter? He responded three or four dollars, once in a great while, five. I told him of my limited investigation, as I have not been the grocery shoperer for these last many years.

A couple of months ago I glanced at the receipt Laura handed me, and asked “Since when has butter been eight dollars a pound?” Well, she didn’t know. I looked in the fridge and saw I’m eating butter from Ireland. It is very good. However, I suggested she look down a shelf or two at Kreigers, and find Land ‘O Lakes, or some comparable brand.

The next time I remembered to look, the butter line item was four dollars.

Last week I shopped solo. At the butter counter, I realized butter was down to four dollars because Laura purchased the half pound pack of Irish butter. I know there is more local butter somewhere in that store, and I’ll find it.

Yesterday I stopped for a picture of the golf course returning to nature. Quickly, I might add. Those greens are rapidly becoming roughs. 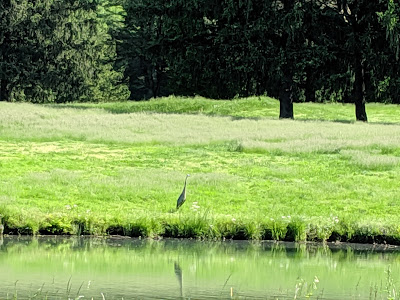 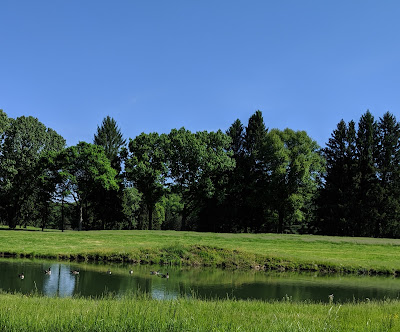 Posted by Joanne Noragon at 9:44 PM