When I frequented live concerts in the olden days, mosh pits did not exist.  How sedately we sat, or stood, finger snapping, singing along, clapping, stamping, yelling. But there was no room to “mosh”, until it was invented. I only knew about it; my punk nieces and nephews had interesting stories, and their friends even more.

I must have been sixty five or seventy the first time I saw people adjourning to the area in front of the stage to dance alone, or with somebody, or anybody, or anybody else. It was one of Bob Dylan’s final tours, featuring people as old as me, or more. I think Bob Dylan’s maybe a year old than I am, but that’s not the story.

Willie Nelson’s band was playing. I remember John Cougar Mellenkamp, though he’d dropped Cougar by them. And Dylan, performing last. My young friend Cara was in the mosh pit, twirling and dancing and hoping for Nelson’s red bandana. I found the entire spectacle a mesmerizing metaphor for life, and then forgot about it.

Laura has been dancing a couple of times of late that devolved into mosh pits. Once at school, when the band teacher left the room, setting off an impromptu session and some dancing, and then the teacher came back. The first time she said Mosh Pit, she looked stricken, until I laughed.

I’ve considered mosh pits and life frequently the last couple of years. Life goes on; the people in it change. My best friend moved far away, my next best friend quit me. The rest of my family support system faded back.  I was into the pit, elbows and knees, looking for folks of like interest.

I danced with the knitters and moved on. I danced with the young adult book club and moved on. But I’ve found more than a few people with interests in common. The impromptu National School Walkout brought to life several little activist groups among those of us out in the cold for seventeen minutes. When we’re back from vacation next week I’ll have even more places to go and things to do.

We’ll miss our first event, the opportunity to stand in the street in Akron on March 24th and help people register to vote. I do hope it’s warmer than March 14th.  But, we’ve organized another event to occur just before the Ohio primary on May 8th.

The Ohio legislature passed a bi-partisan structuring plan for congressional districts, subject to voter approval. The end of gerrymandering in Ohio, we hope.

There will be a postcard party at the library in April, to send postcards to voters in the village and the township, giving them the number of the issue and encouraging a vote in support. We settled on the library when we decided no one house would have enough room or parking if we turned out as many people who came to the National School Walkout. 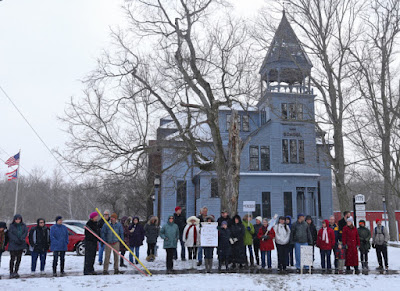 Posted by Joanne Noragon at 8:17 PM