I seem to be on a whippersnapper rant of late. After hours on hold to enroll the township bank account in on-line access, and another two hours of staring down a bank manager, yesterday I pulled the February bank statement. There were no copies of checks. The bank told me to call my account manager. I’ve left him two voice messages to date. Townships are required to have copies of all cancelled checks. Don’t ask why.

There was meeting in February for instructions on reporting the township’s waste. Don’t ask.

It’s called the SummitAkronSolidWasteManagementAuthority. Tim and I used to call it Sa-swampa. It’s a quasi-governmental authority. They collect fifty cents per ton from all waste haulers operating in the county (Summit), and redistribute it to foster recycling. Every municipality receives a “grant” based on population. There is a not too complicated application involved, and an on-line report no one understands, including the people who run Sa-swampa.

I have not attended the mandatory meeting for the last several years because I cannot walk the approximately one mile from parking to the meeting and back again. Last year all the old employees of Sa-swampa retired, and new whippersnappers came in. I de-RSVPed the meeting. I downloaded, completed and sent in the application for our $707. I assembled our waste hauler information for last year. I called Sa-swampa, because I refuse to attempt this report unaided.

There is a new whippersnapper in charge of a new form. We both struggled. In my defense, it is her form, not mine. At some point she icily informed me “this is why we encourage you to come to the meeting.” Long pause as I attempted to regain my composure, but I failed. “You do know I cannot walk,” I replied in an equally uncivil tone.  She struggled on. In the end the form was submitted incomplete. She was crying. I didn’t care.

Oh, did I mention the tornado in the middle of the night as March first dawned. For thirty years I lived in a house with a basement dug into the side of a hill, and missed the only tornado, in 1988, because I was driving in it. Now I live in a trailer!

I knew this one could happen, and I slept restlessly, waiting for it. I listened to awful wind and wondered if my rain barrel would survive. I heard raindrops hit it like sling shotted rocks. At 5:45 my storm alert blasted me out of bed. I turned on the local TV, with the same message. We went into Laura’s closet, with pillows.

K texted from the old house, “Tornado warning. Want to come over?” I answered we were staying in the closet, it was that imminent. Straight line winds in the sixty mile per hour range raged past. The all clear was 6:30. We got dressed and went our ways to school and work.  Note to the future: next time go to the bathroom first. The next 45 minutes will be far more comfortable.

February friends. I've sat in my car fifteen minutes at a time watching them. Sparrows don't disperse until I get out of the car and approach them. 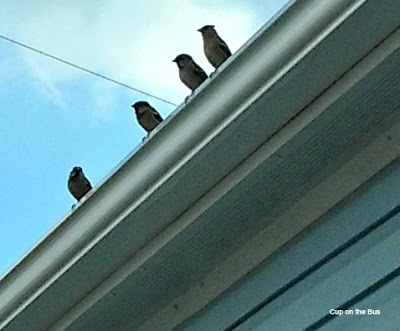 Aconite at the library. I neglected to add aconite bulbs to my list last fall. Next spring I'll have them, too. 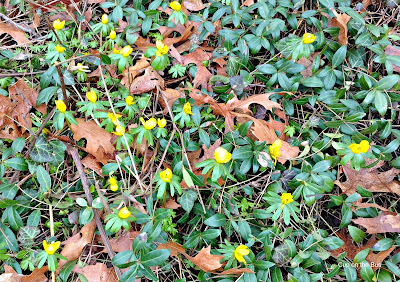 Posted by Joanne Noragon at 2:10 PM