The secret life of Grandma

“The secret life” has been a rejoinder between Laura and me for the last six months. Emptying the trash one evening, she spied an empty Panera coffee cup. “What’s this!? When did you go there!? I didn’t know about it!”

“The secret life of grandma,” I replied.

Since then, if she knows, she smugly remarks she knows about the secret life of grandma. But, if she doesn’t know, she sets about finding out. Toward that end, I try to leave a clue about new secrets.

Today I met a new acquaintance for lunch, and told myself to bring back a napkin or some such thing for a trash clue.

Lynn is not so much a new acquaintance. We’ve sat beside each other for months, waiting for our respective one p.m. counselor appointments. We get on so well for ten minutes every other Wednesday, we decided to go to lunch. And so we did, today.

We discovered in short order, we grew up on North Hill in Akron. My sister and I often remarked how often children who grew up on the hill moved back as adults, as Lynn had done. North Hill is big enough to have three elementary schools, a junior and a senior high, so being from the hill doesn’t equate to being from the neighborhood.

Lynn, though, grew up on the third street behind me. She’s six years younger, and I didn’t remember her, so I asked if she knew my sister, Janice Lytle. “L-y-t-l-e,?”, she asked. “Was Melvin Lytle your brother? I still have the love letter he wrote me in fifth grade!”

The restaurant closes at two, and they sort of boosted us out, so we’ll pick this up another time. And, I forgot to bring home a clue. So, let's not mention this until next time. 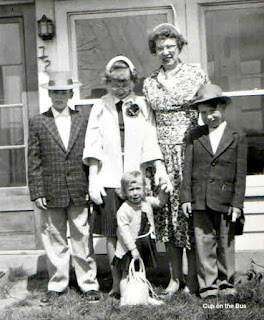 I've used this picture before, and sub-titled Jan as the one who never was spanked.

Posted by Joanne Noragon at 2:21 PM