Years and years ago, when I was the controller of a division of a subsidiary of Maytag Corporation, I attended a regional meeting at another division, in Cleveland, Tennessee. I elected to drive, to continue on to a vacation trip. Approaching, crossing and leaving the Holston River, we could scarcely breathe; the stench was gagging and nostril closing.

I asked someone at my destination about the smell. "You know what we call that smell," he asked. "We call it the smell of money." There was a Hammermill paper mill upriver.

Here's another riddle. What doe this picture illustrate? Well, considering the phrase I used all last fall was "Put your money where your mouth is," isn't that appropriate. Today I put my money where my mouth is. 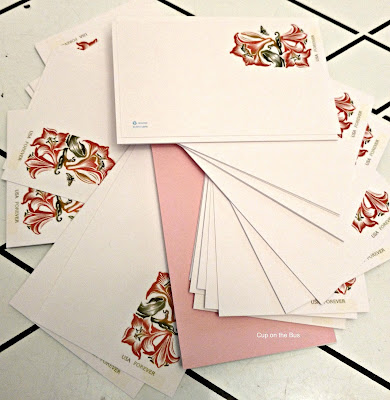 There are one hundred gen-u-ine U.S. postcards, stampeded and everything.Tonight I directed two of them to my senator, Robert Portman, on the issues of the appointment of Betsy DeVos to Secretary of Education and his participation in the rapid repeal of ACA with no replacement. I have a dear friend in the arts whose hair is just now returning after her bout with breast cancer. Without ACA, what would she have done! Now she has a pre-existing condition.

I also signed petitions, one asking potus to disclose his tax returns and the other asking him to put his bizillions of assets in a blind trust. The first has enough signatures for response, according to the rules of the web site. The other is getting there. Though we all know rules aren't big in potus' playbook, go for it if you're interested.

So, that was about sixty minutes of my time. It's time to go knit on my sweater and watch "Fixer Upper."
Posted by Joanne Noragon at 6:00 PM

Email ThisBlogThis!Share to TwitterShare to FacebookShare to Pinterest
Labels: government