Perhaps you’ve met a person who radiates goodness, but has no idea that is the persona the world sees. I’ve known one such.

Eventually our weaving business needed two sewers to make enough stuff to sell, but  the people we interviewed were not a good fit for our laid back little studio. Eventually I went around to fabric stores and dress shops and asked if they could recommend a sewer. I came up with one name, and called her.

Linda lived barely a mile from us and was very interested, but was just about to begin her last round of chemo for breast cancer.  A sweet voice said she just couldn’t take on a job now, but if it were available after the new year, she would like to know.

And so we left it, and she was still the only person I knew of come the next year, so I called again. “Oh,” the sweet voice exclaimed; “I didn’t think you would call me again.”

She came to the studio, and had my standard interview of let’s chat while you sew this shirt. We chatted about her family as I watched her put together a shirt after asking if it had side vents and knowing the sleeve front from back without a word from me. I had mentioned the starting pay before she began, and raised it by the time she was sewing down the facing.

“Wait until I tell my mother I got a raise before I even started!”

Linda was an artist. In her more healthy days she sewed fabulous costumes for a children’s theater, putting together mad hatters and Cap’n Hooks from a scrap of this, a swatch of that. When I saw her costumes displayed I was awestruck, and wondered how she ever came to work in our little studio.

She came in with a smile, she left with a smile, she worked with a smile. She paid little attention to her machines, they performed light and floaty just like Linda. Others cleaned them when Linda was gone, and grumbled, but I couldn’t reprimand her. Everyone was paid by the hour; what difference did it really make.

We had liberals and conservatives, old people and young in the studio. Linda was sweet and kind, ethereal. Her views were liberal, on the sunshine side. The only people she ever judged were those who sent Elian Gonzalez back to Cuba.

Linda must have been a wonderful mother; she lived for her boys and her husband and chatted about them endlessly. The rest of us felt they undervalued her, but knew that thought never crossed her mind. She saved every paycheck, and every bonus to buy something for her boys. One secret purchase was a computer, for Christmas, complete with AOL internet.

This computer purchase was in 2000 or 2001. She came in one day and said she felt so silly. “A man in California was helping me install the internet. He told me several times to click on ‘My Computer,’ and I was so confused I couldn’t answer. Finally he asked if I was still there, and I blurted out ‘But your computer is in California!’”

Linda worked for us for four years. In the middle of that time she said her cancer was recurring, but she was going to go through another round of chemo. We now knew the round before she came to us was the second. She was staying around for her boys, one in college and the youngest, an artist like herself, still in high school.

The jackets became too heavy for Linda to lift, so we hired another sewer, and kept the very light jobs for her, when she came in, for work she would. I cannot recall how she compensated when her legs hurt badly, but compensate she did, lightly saying “My doctor says if I would just stop sitting on my legs, like a school girl….”

Linda missed a few days and called to say she was in the hospital. I went to see her, sporting a big, unwieldy neck brace, for I had just had vertebrae fused. I went into her room, and she shooed everyone away from her bed so she could sympathize with my surgery. She was so tiny, and so gracious about my coming unannounced, with all her family visiting. She was tired, and I stayed just a few minutes, to tell her I loved her and would see her soon.

Linda died that night. A bright full moon lit my room and woke me, and Linda stopped over my bed and said goodbye.

I knew Linda’s sewing. When I hung up the last jacket Linda made, I thought how I would feel selling it. When the time came, I felt compelled to tell the woman of the Linda who made it.  She hugged the jacket to herself and told me her name was Linda, too.

A silly anecdote I read tonight reminded me of Linda and the computer in California, and so you have it. Several years ago I asked the mayor of her small village for news of her boys and her husband. “Quite the bachelor pad over there, now, without Linda,” he replied, and I finally drove by her house, and wondered if the bachelors knew the gift she was. 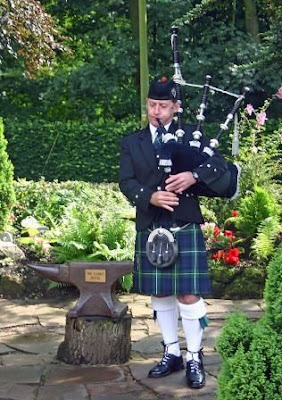 John Campbell, piper in NSW.
At her memorial service, we were piped out with
The Campbell's are Coming.
Linda loved it, I know.
Posted by Joanne Noragon at 9:13 PM