We went to the phone store last Sunday. All of us, en masse.  My phone was really acting up, but on a reconnaissance mission earlier I’d learned it might be curable by being sucked dry and reloaded. It seemed like an opportunity to procure a phone for Emily (mine), and outfit myself with a new phone.

Reconnaissance left me with buyer’s regret for not purchasing the new phone last summer, hang the form of the rebate. Verizon no longer sells phones with a two year contract.  They sell phones on time, no interest, no contract, and a plan a la carte. But, I was open to a new phone and to passing the old to the college bound senior.

My sister, keeper of the phone contract, listened to the dollars and cents of saving money by dropping the old contract and buying a new plan. The young phone nerd explained to me that I would prefer a Samsung analog phone to a Motorola, for reasons I cannot recall. As my only reason for another Motorola was because it is an American company (never mind it went offshore long ago), I was easily convinced by technical talk.

The phone fellow went over the highlights of my phone, and my sister, looking on, said “I think I want one of those. I really wish I had GPS.” So, two phones went on the counter, and two eager granddaughters looking over shoulders gleefully recognized now there would be one for each of them to explain to the old ladies. Uncle Tom sat in the chair by the window and watched the trains go by.

There was a stack of tablets near my left elbow, on sale for fifty dollars while quantities last. Now, with Emily’s phone, and a tablet added to the deal, plus cases all around, we were no longer saving money. But we agreed on a divvying up of the extra charges, signed many forms, packed two handle bags with the swag and came on home.

Emily and Laura were in electronic heaven all afternoon, changing ring tones, adding apps, connecting wi-fi, adding email, turning on this, turning off that. Emails from Verizon began rolling in. “You have used 75% of pro-rated data. 80% of pro-rated data. 85%...” We decided not to worry; it was what was left of the old contract, rolled over to the new plan.

By the time I came home from work Monday, I knew I hated Samsung. The phone book, which I use the most, was maddening. Jan was unhappy, too. A flip phoner for fifteen years, her thumb refused to swipe properly and she was missing calls from friends and customers. Only Emily seemed happy; Laura, whose phone still flips, said it must be nice to not have a dwerb phone anymore.

Then the killer email: “You have used all your data. All additional data used will cost megabucks per kilowatt.” Or something like that.

The next day all the goodies went back into the bags and we were off to the phone store. The solution was too simple. Jan returned her phone and after the restorative business happily tucked the old flip phone back in her purse. Bonus—she no longer needed a bigger purse.

My remorse was not so easily solved. The tablet was returned; the phone could not be. Although I thought I’d gathered all the associated chargers, I missed the one that came with the phone. Back to Plan A.1; Emily could have a smart phone. So, the adept young man transferred my new phone back to my old phone, and Emily’s old flip to my new old phone. It took us time to sort through that boggling transaction, and I had to stop and reconstruct it, in order to type it.

And then the painful remorse—the 30% restocking charge means we will be months recouping our “savings.” 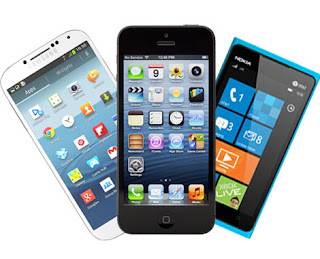 Posted by Joanne Noragon at 2:57 PM