You can do this

In the beginning we bought far too many looms.  Good looms are never a bad investment.  We learned from our looms, and then sent them back into the world, generally at a profit and never for a loss.  Until we learned a good deal more about them, we gladly went to look over looms that folks wanted to sell.

The only Union Loom we ever owned we purchased in a distress situation.  The owner loved it, but needed the money.  It was a wrench for the woman to part with it; she had happy memories of learning to weave on it when she was a teen.  But, we paid up and loaded up and the deal was done.

Driving back we knew we really didn't want it, but…..   Let’s give it to Beth.  She can weave rugs!

I knew Beth was away on a business trip.  I also knew Chrissy had a key to take care of the cats.  Chrissy was very reluctant to agree with my request to let us into Beth’s house, as she should have been.  It was extremely presumptuous of Beth’s mother to put a loom in Beth’s dining room and wait for Beth to come home and find it.  But she let us in, and Jan and I hauled the loom up a long set of stairs and set it up in the dining room.  We put on the first warp and threaded the heddles and the reed.  Then we went home and waited for the phone call.

When it came I caught heck for involving Christina, but not for the loom, which really interested her.  In our ignorance of Union Loom braking systems, we put the first warp on the wrong direction.  Beth fought her way through it, and was a downhill weaver thereafter.

She bought several looms and wove steadily for us until Bill came along and distracted her. Beth owned her house by then and all the looms lived in the garret.  Shelly and I finished emptying the looms up in the attic of desperately needed fabric while Beth and Bill made goo goo eyes downstairs.  By the time they married, all the looms were out of the attic and sold.

The Union Loom never made it to her attic; it did its service on Whitcomb. That’s where Ann learned to weave.  The Union had been pressed into service for fabric by then and Beth wove a couple of yards each night, when she came home from work.  Ann moved in with Beth temporarily, after selling her home, before moving to Wisconsin.  She came home from work earlier than Beth, and looking for something to pass the time, picked up a shuttle.  She accumulated her own looms in Wisconsin and wove for us until we retired.

The  Union Loom we sneaked into Beth’s house?  The original owner said she’d like to buy it back.  So, having done its job, the loom went back to the person who loved it most. 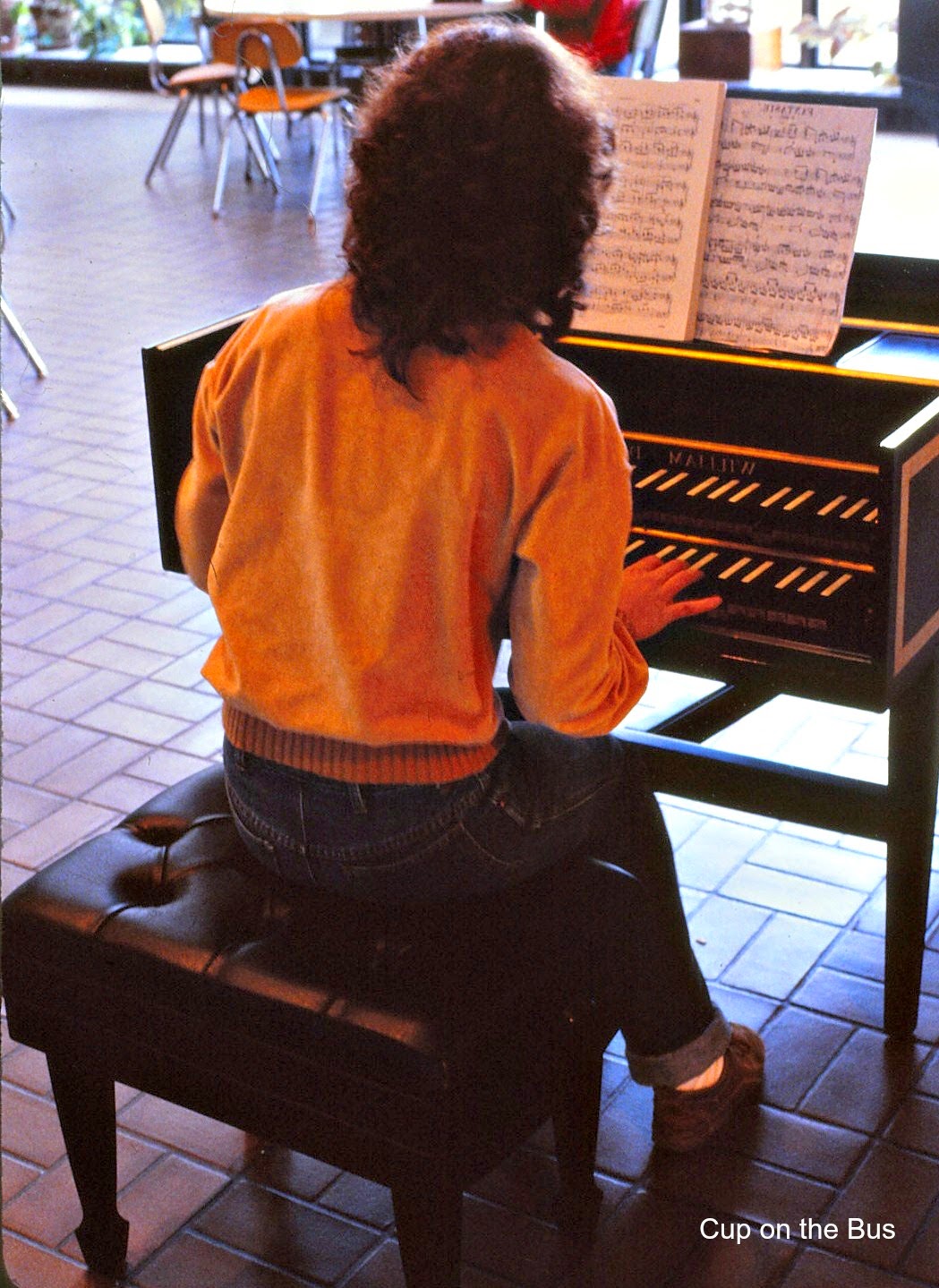 Christina, the cat sitter who let us in.
During her harpsichord phase, twenty years ago.
She grew up to be a New York attorney.
Posted by Joanne Noragon at 9:07 PM