The kitchen was not large in the house where I grew up.  It was remodeled after I left; the refrigerator swapped with the stove, yielding counter and prep room.  But when I grew up no one thought about those kinds of things.  Mom cooked on a stove standing alone in a corner and the first refrigerator I remember was an ice box on the front porch.

We were put to work at an early age.  I remember sitting on the counter, drying dishes my mother put into the drainer at my right elbow and stacking them on the counter at my left.  Mom would put the dry dishes into the cupboard when she finished washing up.

All children in turn, then grandchildren, spent time sitting on the counter for a job.  Another counter job was to put peach halves face down in to a quart jar, my mother’s canning method.  The peaches spiraled around until the jar filled and the next jar started.  The years there were fork tine holes in the canned peaches were the years mom had no child available whose small hand fit into the quart jar and left a peach behind.
The kitchen towel drawer was the last drawer before the back door.  Folding clothes was a job assigned at an early age, and there was only one way to fold towels in my mom’s kitchen.  In thirds.  The towel went on a flat surface, was folded in thirds lengthwise, then in thirds again; a compact little bundle that could be stacked two or three towels high, two towels across, four or five towels deep.

We did not mess with the system.  Bad towel folding was among the few things that irritated mom. Shoving towels in the back to avoid the routine could have you folding towels long after bedtime, lifted from slumber and sent to the kitchen to correct the oversight.

When I kept my own house towels were not folded in thirds unless my mom was visiting and took it upon herself to redo the entire drawer.  When we all moved in together the subject came up again.  Jan and I both said towels could be folded in any manner that pleased the folder. You know how mom folded the kitchen towels she washed.

And then there were the sheets.  Mother owned more sheets than were in a department store and rotated them.  When we changed our beds, almost weekly as I remember, we had to take clean sheets from the bottom of the sheet stack in the linen closet.  When we folded and put away the laundry the clean sheets went on top of the stack.

I always took my clean sheets from the top of the stack and mentally defied mom to figure it out. 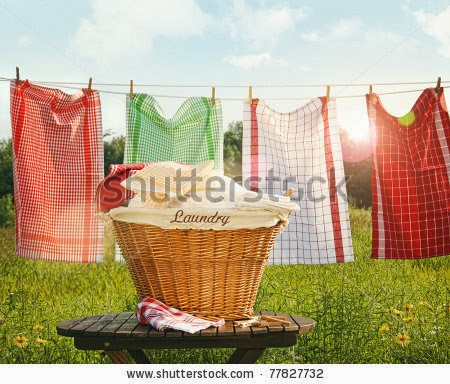 Posted by Joanne Noragon at 8:59 PM