When we bought this house on top of the hill there was a garage under the long studio wing, its entrance  paved with pebbles and the front bank was sliding down. An extra oak tree was leaving the front yard and moving down the hill.

In front yard what passes for grass (and still does) went right up to the studio foundation and where there is a ramp now. When Guido built the retaining wall and poured the drive and apron we specified steps from the lower level, up the hill. I asked him to snap a garden hose from the top of the steps in a nice curve, to lay a sidewalk to meet the walk that ended at the porch steps.

One little snap and we had that entire garden between the walk and the studio. Oh, yes, and all the backfill of the old stone driveway. 1988. There were many abortive attempts by Jan and me to start a garden. By fall it would be weeds and meet the weed wacker. 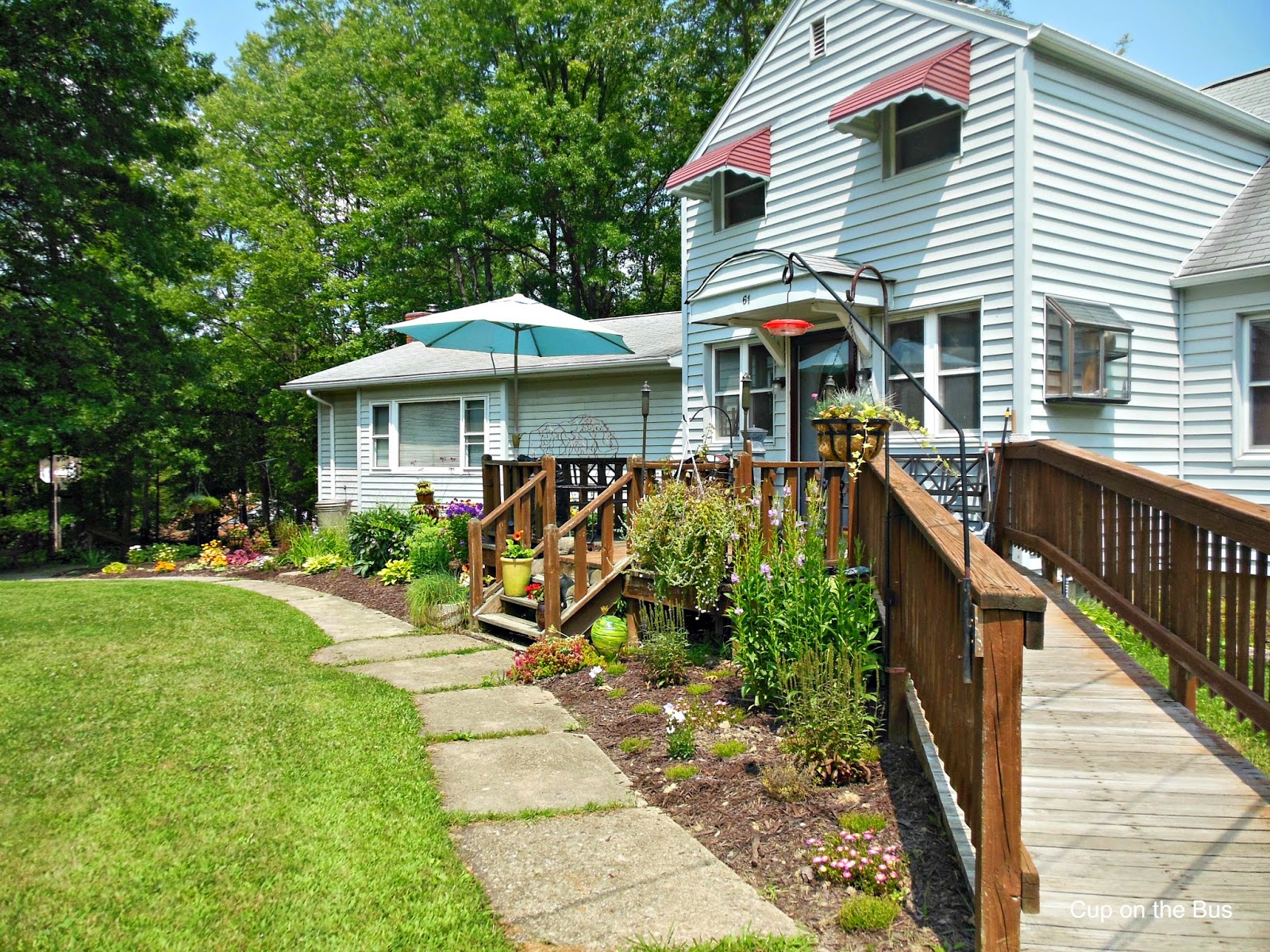 Jan once tried to barter with a master gardener to quilt for her for life, for free, in exchange for having the “garden” become a garden. Her customer’s response: “You don’t have enough money to turn that into a garden.”

There was another attempt several years ago, when Laura was maybe four or five and we had the children for a summer, to make order of chaos. The square pavers were laid, but by fall the garden again met the weed wacker.

In the meantime, the other side of the porch was grass, until a warm weekend in March, 1997, when another contractor friend built the ramp in three days, and Mom made her last trip from the house in dignity, in a wheel chair, not on a stretcher. Another bit of garden produced, filled with Aunt Laura’s iris and Dad’s fall blooming crocus. And the weed wacker.

We needed all last summer, as you know, and a deal of grandkid muscle, and the gardens were wrested from the weed wacker. Not by a professional, but we did sort it out as we went. The master plan is to stuff in enough plants to smother weeds. It may be working. Or, to quote my garden vice president, Laura on how long it will look this nice, as long as you live here, my dear. 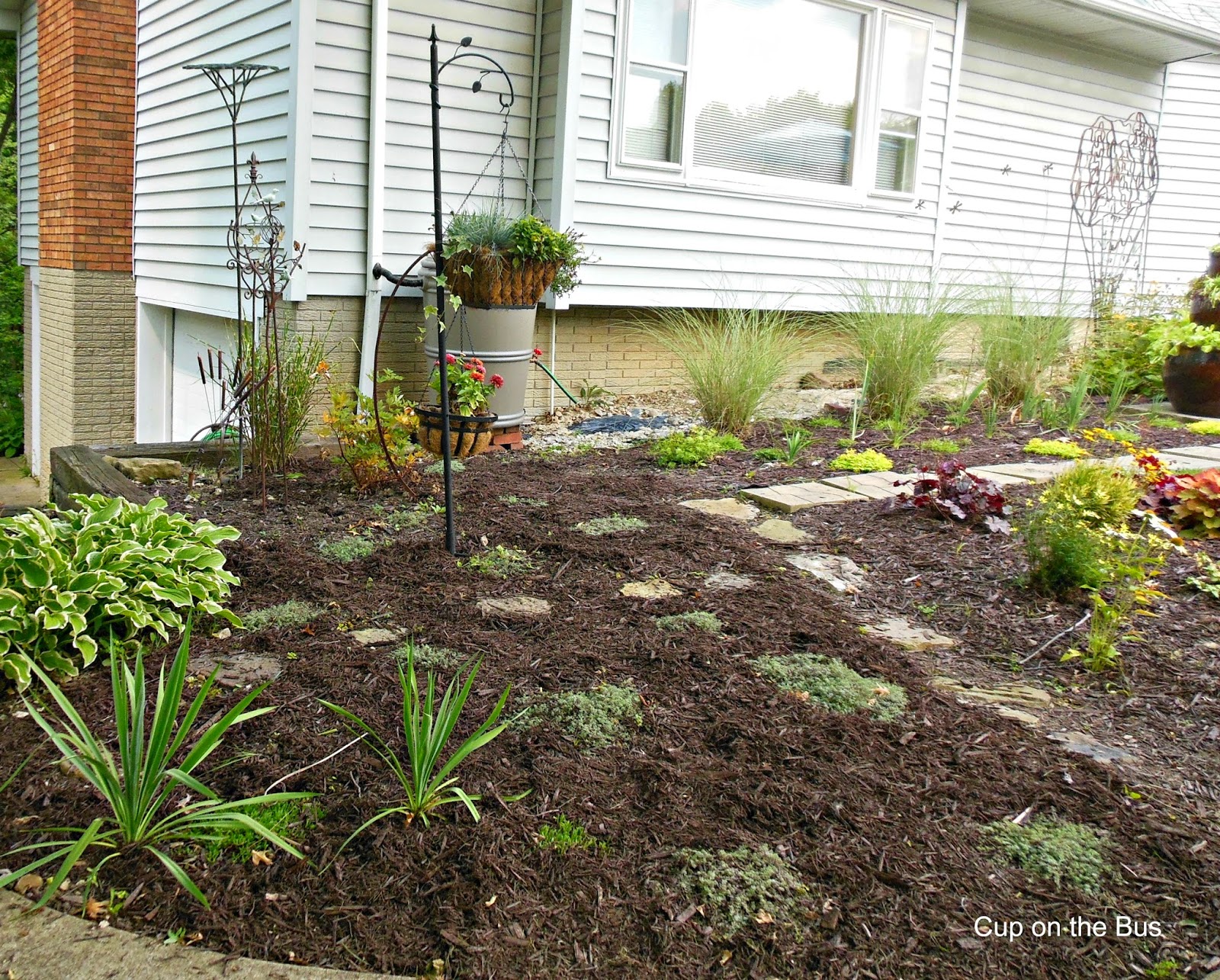 The very bottom, by the steps down to the garage. Hamilton and Emily laid all those extra stones to form walk ways and make garden sections. This lower third was all anemone in the spring, then Laura's neat rows of fall crocus foliage. Now the wooly thyme is spreading and spreading. That should be the name of a song. There's a pampas grass and a bleeding heart back there, too.

In spite of transplanting all the yucca to the back, the two hardy souls at left will not be deterred, so they remain. As I noted before, there will always be yucca. 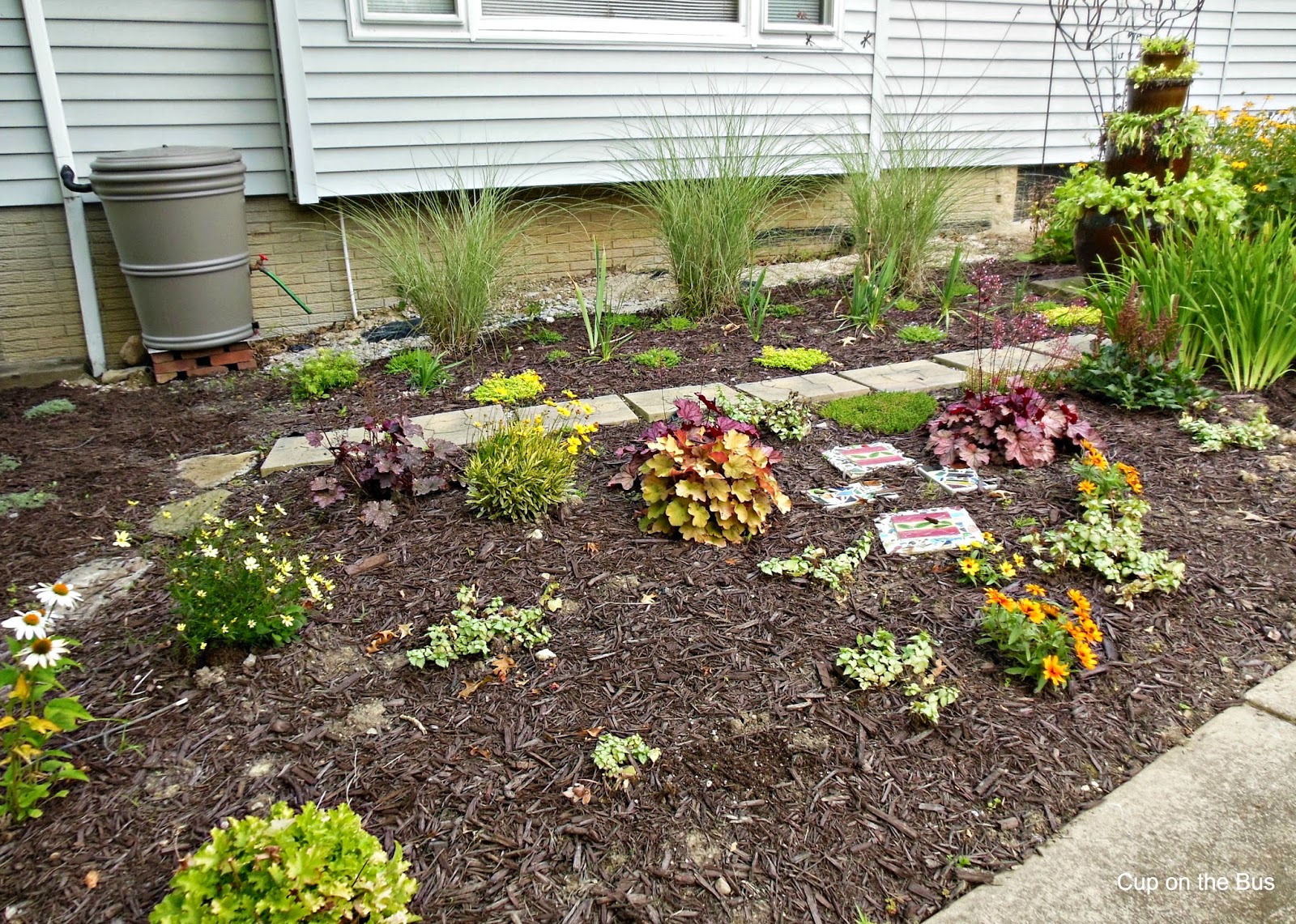 The middle. At the back, pampas grass and yucca, just like the decorators do in professional building landscaping. Take that, Ms. Master Gardener.

In the front, some Canterbury bells and some daisies. This was a place to ponder, but now I know. I am as fond of Canterbury bells as I am of chipmunks, and I'll put another half dozen or more in here in the fall, together with that low ground cover that has purple flowers. What of the daisies, you ask? 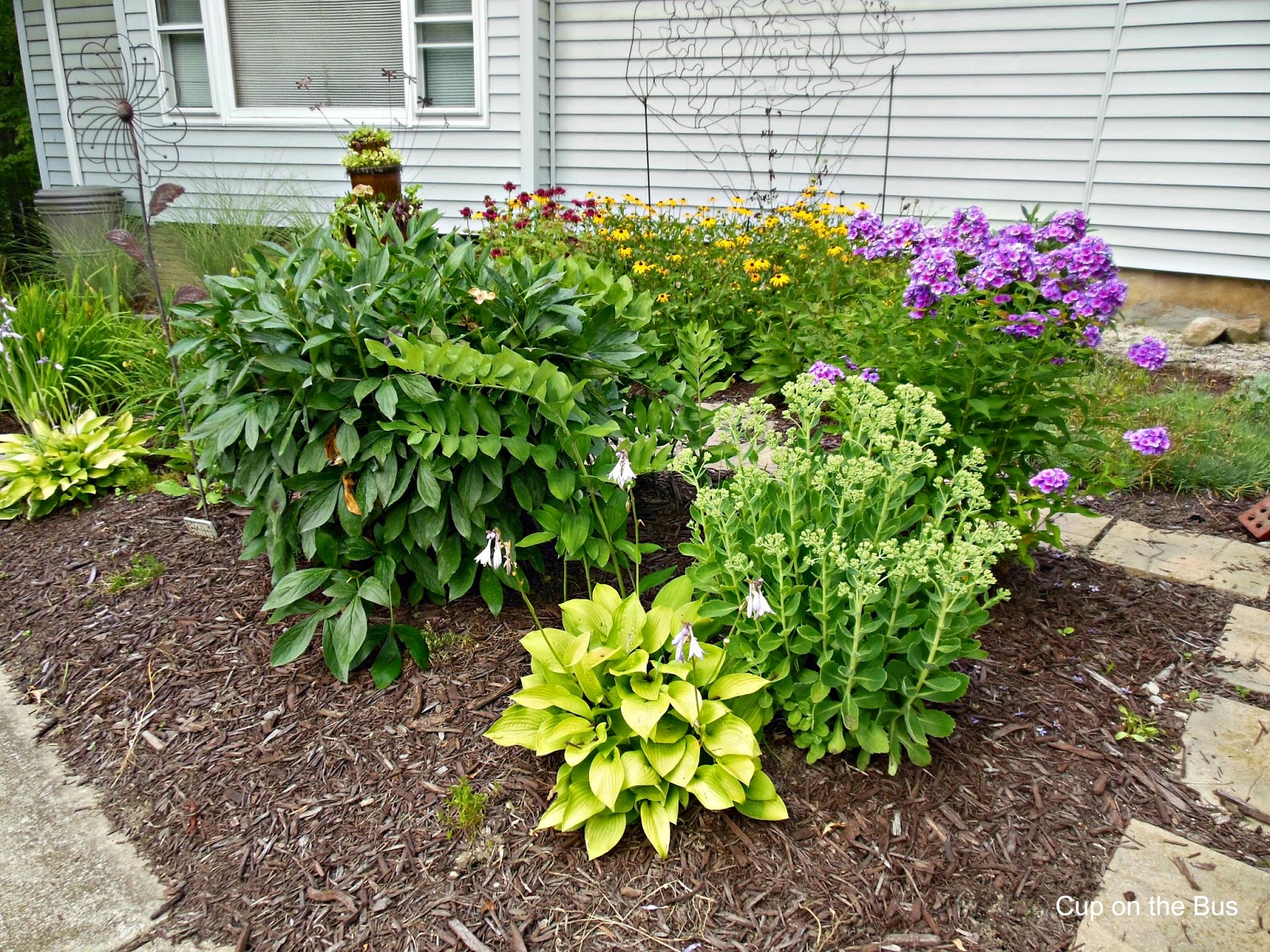 This is the top third, and has a great assortment from back to front. Butterfly bush, brown eyed Susans, phlox, the Solomon seal that bloomed in the spring. But the old peony that escaped the weed wacker is too big. In the fall it will move back by object d'art wisteria trellis, and I'll fill in the space with all the orange and yellow center plants.

Many failed years of trying to establish clematis on the trellis, I'm going for a climbing rose in the fall or spring. 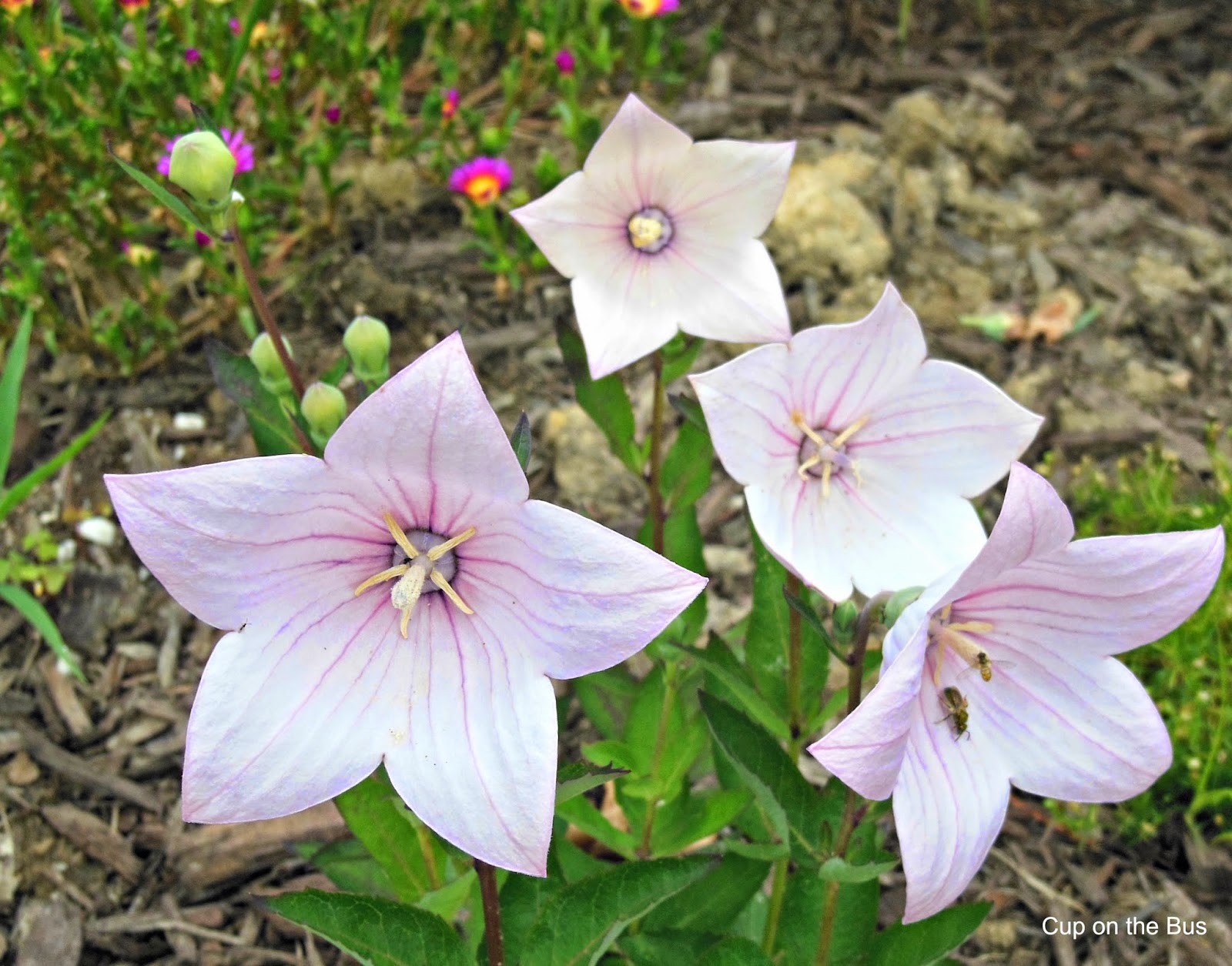 Another little pretty, over in the triangle by the ramp. And that's the plan.
Posted by Joanne Noragon at 3:43 PM

Email ThisBlogThis!Share to TwitterShare to FacebookShare to Pinterest
Labels: garden