When I moved here almost thirty years ago, I fell in with a community stalwart of whom I may write chapters.  We are good friends to this day.  Nina is a few years older than I am, living on the same track, but half a dozen steps ahead of me.  I doubt I ever will be on the cover of Life magazine, as she once was, but otherwise we tic off similar life boxes.

Nina’s granddaughters came to live with her when they were ten and twelve.  That was just about ten years ago.  The oldest graduated college a year ago, the youngest is still in college.  They both are red heads.  I never got a red headed grandchild.

Heaven, her oldest granddaughter, came home from high school and announced, six weeks in, she was dropping out of band, but the band teacher wouldn't let her drop without a note from Nina.  Nina agreed to write the note, but told Heaven she must try and settle her problems with the teacher first, before using Nina’s note excusing her from band.

The next night Heaven was able to announce that although she would not play any instrument available in the band room she was staying in the band because the music teacher had brought her personal instrument in and introduced it to Heaven.  Heaven loved it and would be playing the mellophone.

The music teacher’s return note thanked Nina for writing that Heaven had to solve her own problem, which the teacher said, was a case of the young lady being so critical of every instrument in the band room that even the saxophone tickled her lips.  The mellophone was worth a shot, and it worked.  The notes, of course, a ploy to buy time.

Heaven attended West Virginia University and went with the band to bowl games in more states than she could ever visit on her own. Now she’s playing the mellophone in the United States Air Force, and marches in great parades from time to time, not a little due to the wisdom of the old fogies. 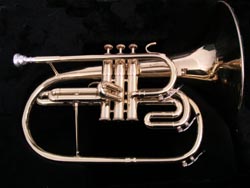 Everything you want to know about a mellophone