Back at the ranch

Dan, the maintenance man, asked me to stop and approve the way he intends to install the screen door. (That's Dan's back, in the next picture.)

I said I didn't need to stop; I wanted both door knobs on the same side.

"I can't do that!" says Mr. Dan. "Then you won't be able to bring anything through the door."

"If you look at it now, you won't argue with me later."

So I went over, and took the opportunity to walk up my new steps.  The deck guys closed the risers, so my wheeled cart will work.

My front door, there, opens in, to the left. They did it that way at the factory. If the storm were hinged on the same side, it would open into the middle of the deck, using up much of the access room. 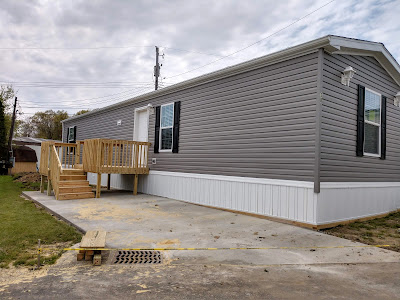 I looked in all the rooms, but only took one picture. The window at the end of the drive will be the studio, and yes, it has the smallest bathroom in the entire park enclosed in that room. Definitely the cat's room, as there is no other adequate place. 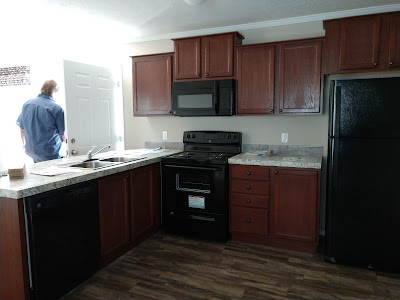 I don't see moving before June. No water hook up yet; the state hasn't inspected yet. There is no shed, there is grading to do and grass to plant. But, it's happening.
Posted by Joanne Noragon at 3:48 PM