One more in the books


Another good workout with Greg today. It's coming along. Even Greg had something to say. I walked while looking down, then up, then down. Down was OK, but up was iffy. Greg remarked when I was good at it, a bus probably wouldn’t catch me off guard. I responded I probably would not be on a bus again, but then had to stop and think, it has not been a year since the accident, and possibly eight months since I began rehab.

I began this essay intending to remark I’m making little of retirement. I just can’t settle on some alternative to employment. I went to lunch with Beth. I went to the quilt show with Ruth. I’ve read more than a few books, now that reading them seems the way to retrieve them. I should be angry about losing the books, and my education and my ability to retain information and form it into coherent thoughts, but I’m not. 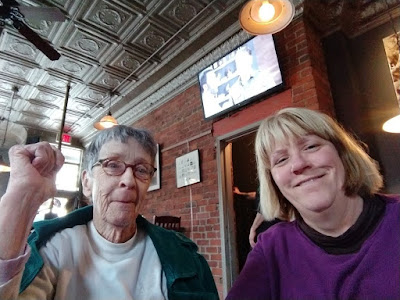 I did cry over it a couple of nights last summer, but now it’s just resignation and trying to walk a straight line while looking up and looking down. I hold the rail, too.  The only constant left is 3:45 pm, when the high school bus drops the children.

Laura came in tonight with a prize; an EEG. The Hudson EMS sent a team to their health class today, and she was the only volunteer. It looks a decent EEG to me, speaking from looking at a lot of mine. Her oxygen was 100%. I never read more than 98%, and would have bet no one scores a hundred. And, unless a whole lot more changes, she and I appear to be the only two who will be outside her school on National School Walkout next month. 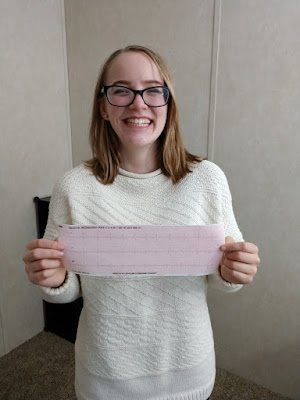 The books I’ve read have been fairly light weight. I’m almost through the last of three by hometown hero Dave Giffels. Then I have the Autobiography of Malcolm X to tackle. I know I read this book. Even more than Wuthering Heights or Middlemarch, I cannot put together one line of it. Somewhere in my Master’s Degree in American Literature lies the Autobiography. I’ll start it next week, I hope.

I had a haircut today, overdue, and picked up a new ring I’ve waited for. I think it looks like a tree of life. The other ring I had made this summer, when Keppra ganged up so badly on my dreams. I’d wake up and twist it. Nice, solid, twistable. I’m nearly done with the Keppra, two more weeks. 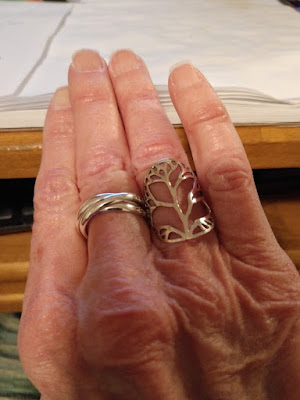 And I had my ears re-pierced today. It’s been eighteen years since my daughter’s wedding. I took out the earrings my other daughter admired and gave them to her. I wonder if she still has them. One was left, one was right. Very unusual. I haven’t worn earrings since. I felt nothing; the technician’s needle went right through the old piercing.

Now when I go to lunch with arty friends, I won’t be the only one without earrings.

Posted by Joanne Noragon at 8:33 PM