Ann called me today, to read the top of the fold headline from her very red home town newspaper, circulation a few thousand. I’m watching the next three years as chipping away. Sort of like the flakes around lambie, toad and Pig. That’s her headline, top of my page.

I pay attention to Wisconsin. I see it as the obverse of Ohio, and sometimes the perverse. I called Ann in January to tell her that in a special election to fill a state Senate seat vacancy in ultra conservative northern Wisconsin, the Democratic candidate took the seat in a district Trump won by 17 points. My ultra pessimistic little German friend called me today. With some hope.

Over the weekend I wrote out postcards to a couple dozen sports figures, pitching a public service denouncement of gun availability. They went in outbound today, but won’t move until tomorrow. I haven’t a lot of hope there, by the time they cards go through layers of player management, but here’s to one sticking.

I wrote to my friend, too. I spent twenty years working with him, to make this town a success for the artist/merchants and for the tourists who come every weekend. He and his husband are ex-pats now. I know many, many will relate to his answer:

Nice to hear from you, but I’m not your guy.  I don’t have any connections to sports heroes, and I barely have a connection to the country anymore.

One of the reasons I left the US was to remove myself from the disastrous state of the union… and I doubt I will ever live in there again. If we tire of Mexico, Europe or South America will be next on the agenda.

Sorry to have become a pessimist — but I gave several decades to activism for the Just causes in the US… And now I recognize that life is short and time is fleeting. I’ve chosen to be a bit selfish these days, and I feel the gun issue is a lost cause.

Good luck with the effort — and I applaud you for trying.  I just don’t have it in me.

How sad, all his talent is gone, left. Laura and I have an eye on the Women’s March organizers and the March 14th anniversary march in support of the Florida students. She says her GSA advisor would be on that in a heartbeat, and she will bring it up with her.

And, in the everything old is new again, Laura had a great visit with her sisters Saturday, and scored a twenty five year old sweater. Her mother, an exquisite knitter made this sweater for Becca. Then Hamilton wore it. Then Emily. 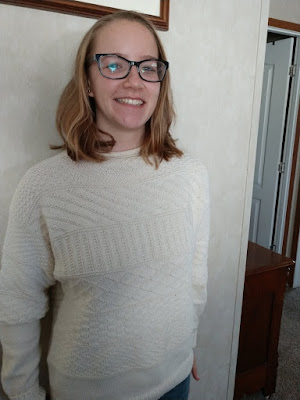 Posted by Joanne Noragon at 4:00 PM