Laura was sixteen in December. I thought, “Wow, half way through being a teen,” before I realized being a teenager starts at thirteen. Ah, well. At whatever point, Laura is an interesting person, learning.

Some time ago she announced she had changed her mind about spending her junior year abroad. For the longest time she would not tell me why, but one day blurted out the decision was the outcome of her mother “tangling” her in a conversation. No further explanation. I understand the problem with her mom.

But, Laura recognized what happened and knows how to deal with it. She picks her battles with her family carefully; this one was not worth her effort. I am pleased she saw the opportunity and went through all the hoops to present her application to the sponsoring group, and be accepted. The next time she will be able to say “I’m going!” to her mom, and go.

The current semester is drawing to a close and next semester’s courses being arranged. Ever the advance planner, Laura scheduled out her entire high school curriculum, two years ago, and put it under my desk pad. A week or so ago, she nonchalantly announced she would not be taking band next year, and probably not her senior year, either.

Band has been the pride of high school, starting with their mother. All four children loved band dominating their lives. Band camp. Marching band until Thanksgiving, before the reward of concert band. This time I was stunned, and asked what she was taking instead, and why she was quitting.

She’s quitting because she doesn’t like it. She doesn’t like it because it’s not where her friends are. I hadn’t much considered what the little gang of hers does. “But Meredith is in band,” I protested. “Yes, she plays the cymbals so she can be in marching band with me. I said I was quitting and she’s so glad. She can quit, too.”

Laura signed up for art and creative writing next semester. Plus the usual math, science, ASL. Fractional exponents are a thing of the past, mastered and gone. In chemistry, they’re making a solid of two liquids. “It’s called a precipitate. You have to add up…oh, never mind. I just do it!”

About this time last year I was making plans for vacations. Spring break. Washington DC. Walking around the National Mall and the homes of presidents. We know how that went. There will be no red buses this year!

I asked the parents of my favorite of the gang if Victoria could come on some short trips this summer. I can send the two of them off on some excursion and wait for them in the coffee shop, so to speak. Now I need to see if I can still book a cabin or lodge or B&B. I was thinking the Finger Lakes in New York.

Went to lunch with Deb yesterday. She threw in New River Gorge and Hawk’s Nest State Park in West Virginia. Lots to do. 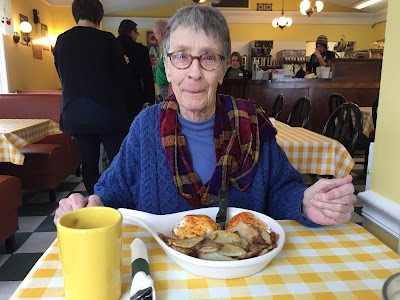 Lunch with Deb. I had Eggs Benedicts (quoting directly from the menu). I considered requesting an Egg Benedict, but thought What the heck. I can handle it. Here's an up close view. The eggs were perfect, the bacon good. I left behind the muffins and most of the delicious home fries. Next time, Egg Benedict for sure. 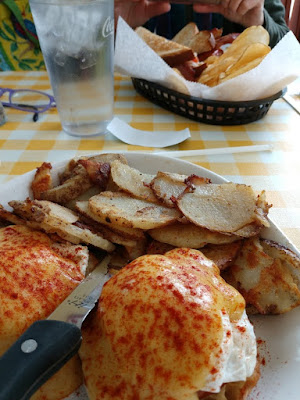 Posted by Joanne Noragon at 4:07 PM