Laura’s fifth grade band presented their first concert at lunch time.  Uncle Tom and I went, and had great third bleacher row seats.  Oh, those young mothers and fathers, going up and up.  We sat at grandparent level.

These little folks can take “extracurricular” activities in place of recess. We were at the Wednesday Friday Band performance; there is a Tuesday Thursday Band, too.  About sixty five members each.  Flute, clarinet, alto sax, tenor sax, bassoon, trumpet, French horn, trombone, baritone, tuba and percussion, and from the sound of them, all well past the painful stage.

The band filed in, took their chairs.  The director explained this little band has worked diligently for four months, and had another four months hard work ahead.  They have just completed the same note phase and next term begin harmony.  They played London Bridge.

The conductor turned back to us to introduce Aunt Rhodie.  It really needs no introduction; we have been intimate with Aunt Rhodie for several months.  But first he needed a volunteer from the audience to help the story teller.  Laura, almost too far away for me to see, had Uncle Tom in her sights and her little finger jabbed over the shoulders of the flute section.  Tom shifted uncomfortably.  I poked him.  He volunteered. 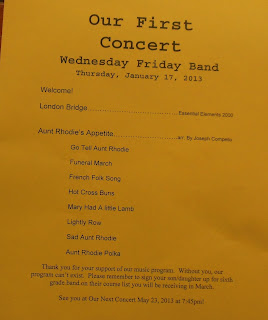 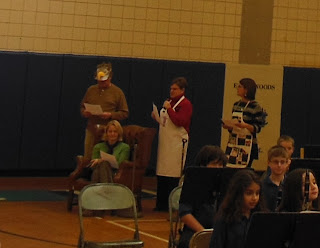 This little musician can handle her own weight in tubas! 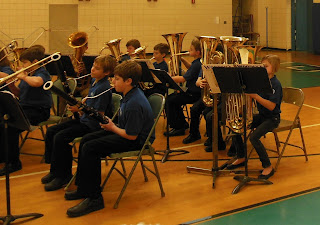 Give them a hand.

Our little trumpeter files out, and we all go home.  Or back to work. 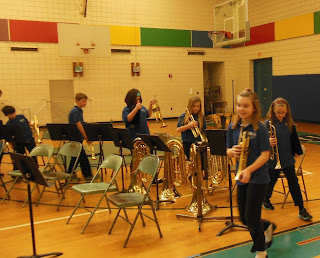 Posted by Joanne Noragon at 4:43 PM