Mom came by her wandering foot genetically.  She was born in 1918 and on her father’s vacation excursions.  Niagara Falls or the Pacific Ocean, all the same to him, from Cleveland, Ohio.  I wonder what my grandmother thought of lugging bedding for a family, and probably guests, from one set of tourist cabins to another.  I do recall Mom telling of one vacation in which she had cherry pie for breakfast every morning.

Travel and vacations were important when I was a child.  A trip of several days to St. Louis when I was about six or seven involved motels and hotels, and probably tipped my frugal mother (and father) into the camping mode, the accommodation I recall from my childhood.  Some of my first blogs recounted family camping, and especially a tent my dad fashioned of a parachute, marbles, and a tent pole.

Mom budgeted for the annual family vacation.  She had a shoe box with envelopes, each labeled with something she was saving for.  One envelope was the vacation fund and the figures would accumulate down the outside of the envelope.  On one very cold winter morning the engine block of the family car cracked.  But by cashing some bonds and using the vacation fund our family left behind the 1935 Dodge.  My brother Walt and I were not sorry to be sitting in the back seat of a 1948 Dodge.  No more sheet metal slicing the backs of our legs.

When we moved to this house Mom was seventy, and still travelling.  In the preceding decade she had visited friends and relatives in Missouri, Texas, Florida and points between, accompanied by friends or her sisters-in-law.  Camping days were over, but I know Mom looked for the best motel deal available.  I have mental images of her at a motel counter, with tiny, white haired Aunt Helen Rita, negotiating a better rate.

Our Uncle Hank retired after we moved here, and mom noticed him and Aunt Flo taking a lot of little weekend trips—by bus.  Their church senior group organized the jaunts and mom was welcome to join them, if there was an unsold seat left.    After missing a few trips she would have enjoyed mom took matters into her own hands and joined Uncle Hank’s church.

The senior group of the church organized tours that required air travel and although Aunt Flo and Uncle Hank could be off to Disneyland or Broadway, mom was not interested in those tours.  Until the trip to Las Vegas came up.  Her cousin Tommy and his wife Mary would be coming from Texas to join them for several days in Las Vegas.  Mom was so excited she bought a new suit case.

It would be my mother’s first ever airplane trip and I said I would see her to her gate and wait until she boarded (1995). Well, she could figure that out by herself!  It’s a long trudge to the gates at Cleveland Hopkins, but she only allowed me drop her.  As I slowed down, knowing my mom, I handed her two dollar bills and said that the approaching man, the Sky Cap, would be carrying her bag, and please tip him, and everyone else who helped her.  That’s how they earned a living.  I could not get out of the car in time; she got her suit case and marched right past the outstretched hand of the Sky Cap.

When I picked her up a week later she handed me two dollars, announcing she had carried her bag herself.  Everywhere. She and Tommy had a wonderful time.  In my files I have a picture of others in the party facing their machines, pulling handles, but Mom and Tommy sitting shoulder to shoulder, backs to a machine, chatting like long lost cousins.  I may never find the picture to illustrate the story, but you can see it in your mind’s eye, I know.  Oh, yes, she didn’t waste any money on those casinos, either. 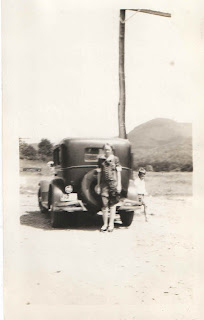 Mom and Uncle Hank on vacation, about 1931