Friends of my Rolf Grandparents, Ray and Marie Hudson, lived in South Boardman, Michigan.  How did they meet, a farmer from the north of the lower peninsula, and a watchmaker from Cleveland?  I have a picture of them visiting with my grandparent’s friends, the Becksteds; perhaps that was the introduction.  My grandmother didn’t date these pictures. 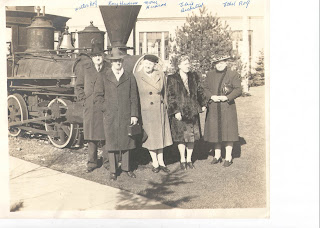 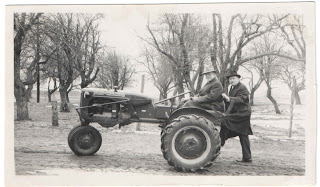 Uncle Ray farmed with horses, which were still at pasture when I was a child and they had been replaced by a tractor.  I remember Uncle Ray telling me when I was twelve or so, the horses had always rested on Sunday; now they were retired, spending seven days a week at leisure for their long service.  They were big horses, and I won’t say Clydesdales, as I don’t know for sure, but they were very large work horses and had fringes of hair around their hooves.


I barely remember Aunt Marie, except as a large and pleasant woman who ran a tight farm kitchen.  She cooked on a wondrous wood burning stove with many lids that lifted up with special handles.  There was also a kind of boiler where hot water for dishes was available.  She made dinner for the men coming in from the chores or the fields.  Breakfast was not to be believed.  Every individual food I ever had for breakfast, all served up together and consumed en masse by the men.  Bacon, ham, eggs, pancakes, oatmeal, pie, toast, butter and jam, and more I’m sure I don’t recall.  Even more food on the table for dinner, this time fried or roasted meat, mashed potatoes, vegetables of every sort, custards and puddings, loaves of bread, pies.  I can’t recount it all. 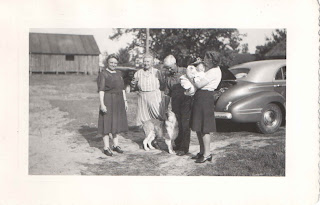 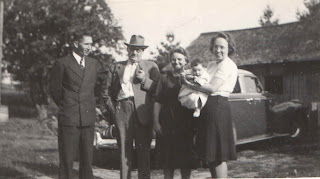 
I do remember Aunt Marie clearly from a visit when I was three or four; after that there was a slender, quiet lady named Aunt Louise.  In recollecting trips to South Boardman, the grown-ups always mentioned that no one ever knew Aunt Marie’s age, not even Uncle Ray, but they assumed she may have been as much as twenty years older.  Personally, I would have been worn to a nub by the amount of labor required of both Uncle Ray and Aunt Marie.


Uncle Ray and Aunt Marie had no children.  Uncle Ray still farmed in the ‘40’s, and had dairy cows as well.  I was sent down the lane one night to bring the cows home and was so proud, never realizing Shep, the border collie, had done the job.  They had no children, but took in and raised up children from town or from neighboring farms where there were too many mouths to feed.  I was introduced to one such young man when I was twelve and visiting with my grandmother.  He was home for the summer, from college, and visiting.


In a memorable visit when I was three or four, Uncle Ray was milking cows and I was watching.  Two barn cats sat nearby, and caught squirts of milk he occasionally sent their way. 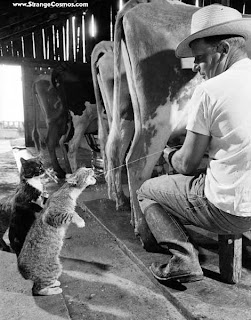 Not Uncle Ray, but a treasured picture, found on the internet
When he sent a squirt at me I ran out of the barn and wiped the milk off my leg with weeds and grass!  On that same visit I was standing near him when he opened a kitchen drawer, took out a long black box and pressed a little gold button.  I was all big eyes as he took a long silver knife and closed the box.  He tested the knife against his thumb and invited me to come with him.  We went out the kitchen door onto the long side porch, down the porch, down the stairs and down the path to the chicken yard.  He caught, killed and took the heads off two chickens so quickly I did not know what had happened.  We went back up the path and the women were waiting on the porch with boiling water to scald and pluck the chickens.  I left.  I knew if anyone ever again opened a long box and extracted a silver knife, I would not go with them.


When I in my teens, on family vacations, we visited the Hudson’s on our way north.  I remember we had to pass Fife Lake to get to the farm, and there was an octagon barn near them.  We would go on north; I recall stopping for the Cherry Festival in Traverse City one year, and Uncle Ray and Aunt Louise were there.  We would go on to cross the Straites of Mackinaw on the ferry and keep on going west.  The Mackinaw Bridge was completed before I grew up.  It remained a family destination and Jan says they still took the ferry.  Mom would go out of her way to take a ferry.


When Grandma Rolf died in 1989, mom sent a note to the Hudson’s in South Boardman, with another note on the outside to asking it please be forwarded if anyone knew if Ray Hudson might still be alive.  Her note came back marked UNKNOWN.  How sad.  Contact was kept well into the 1960’s, but how could anyone have known to contact the Rolf’s on the passing of the Hudson’s.


For several years I exhibited at an art show near Charlevoix.  On the way home one year I turned off to South Boardman.  Nothing was familiar and I went up and down a few roads, including one called Hudson Road, but I didn’t recognize the farm, or even find the octagon barn.  The memories are familiar only in my mind.

Posted by Joanne Noragon at 3:51 PM