Grandfather Hogue was a carpenter and house builder with his brother-in-law, Frank Bisson.  Later he went to work for the Hawkins Lumber Company in Akron, Ohio.


My personal memories of my mother’s parents were that they were very dour and stern.  My grandmother would exhibit great pleasure when her daughter came home to help her do the canning and jelly making, or wall-papering projects.  Grandpa always seemed glum and sour.  They never showed any affection for us kids and rarely did they appear happy or jolly.  They had ten living children, five of whom were still young and living at home when I knew my grandparents.  My Mother Mamie, their first-born, brought her four children and one unborn, to her parents when I was about five years old, so my grandparents really had a lot to worry them, trying to feed their own five and an additional five when my mother moved in with her brood.


My father’s parents were John William and Elizabeth Annie Crumm Lytle.  They lived in Coalmont, Pennsylvania, where I was born.  I’ve only the vaguest memory of my grandma Lytle, a wisp of a gentle lady with white hair in a bun on top of her head.  I don’t remember ever seeing my Grandfather Lytle.  My father had at least two brothers and a sister, Grace.  Horace and Blanchard, (whom we called Uncle “Pete”) and the sister were all school teachers.  I remember only Uncle Pete who came to visit us twice while my mother lived with me in Cleveland.  My father was a mining engineer as well as a very gifted fiddler.  Dad was moved around often by the coal companies he worked for.  It was my impression while I was growing up that my mother got disgusted with the constant moving by train and re-settling in wherever her husband was working at the time.  She gave me the impression, the very few times we talked about it, that with her growing family, she just couldn’t take the moving about any more and left my Dad to shift for himself, while she took us kids and went home to her parents to stay.  I can remember seeing my father only once after we went to live with my Hogue grandparents.  He came to grandma’s when I was around six years old, and afterwards overhearing some of the talk about it among the elders, I thought he had come to ask my mother to come back to him with the children.  She didn’t agree and that was the last we ever saw of him.  After we had been sent to the Summit County Children’s Home in Akron, I’d written a letter to my Dad, promising him that if he would bring me and my two sisters each a gold wristwatch, my mother would take him back.   Dad died when I was seventeen; he had changed his name to Lyons, and died of heart trouble in a Salvation Army Camp in Pueblo, Colorado.  The only way the authorities learned who he was and where his family and home were, was through that letter he had preserved and carried on his person for the ten to twelve years.


My grandmother Hogue’s mother was Elizabeth Mulholland Maley, her father was John Maile, born in County Cork, Ireland.  When the name was Americanized after their arrival in this country, it was spelled Maley.  I know nothing about them except that great grandmother Mulholland was an accomplished mid-wife and doctored with herbs after she came to this country.  Supposedly, her husband was an accredited doctor of medicine.


Up until I was four years old, I lived with my father’s mother, grandmother Lytle.  She lived in a small white house across from a fenced-in school yard.  I can barely remember hanging on the fence and watching the children play.  Other than that one recollection of grandma Lytle’s place, I only remember living in my mother’s parent’s home in Akron.  They had a three story house with basement.  Their three boys and my mother and her five children, all slept in two rooms in the attic.  They also had two daughters still at home.  My mother and one unmarried daughter, (Aunt Gen) were working at the Goodrich Tire and Rubber Co. in Akron.  The other unmarried daughter Helen, and the boys, John, Albert and Clarence (called Taps) were still in school.  We lived with our grandparents off and on, for several years.  Then the burden must have become just too much for my grandparents, as I can remember moving several times with my mother and two brothers, to various parts of Akron.  It seemed we moved as often as the rent came due.  My mother worked nights and brother John, who was only about 11 or 12 years old, looked after Billie and me.  The two younger girls apparently lived mostly with the grandparents.  I do know that the Hogue grandparents assumed the complete care of our youngest sister, Helen Rita, having kept her since her birth.  John would fix our supper, when we got home from school.  Supper consisted of sugared coffee with bread mushed into it.  We called it “coffee-sop”.  Rarely did we have meat or vegetables unless Mom took a day off from work to cook for us.  She would leave a pot of oatmeal on the back of the stove, which was usually our breakfast.


There were no other buildings except the house, on Grandpa Hogue’s property at first.  He gardened, raised vegetables, and grandma was very proud of her dahlias.  They looked big as dinner plates, to my young eyes.  We had no rooms of our own, at the grandparents, eight of us were crowded into the two attic rooms.  There was no play equipment, just dirt and grass to play in.  We mostly played “house” or “church”.  When there was company, the adults all ate at the first table.  When they had all left the table, the aunts served us kids what was left.  There was a parlor which was used as a sitting room by adults and children alike.  Or we played in the wide hallway that ran from the front door, past the living and dining rooms, through the kitchen.  I can just barely remember my great grandmother Hogue’s coffin standing cater-cornered between the two front living room windows.


The house was heated by a coal furnace.  I can remember one Christmas I received a set of celluloid toy dishes.  My brother John and Uncle Taps threw my new toy dishes into the furnace.  That celluloid went up in the most putrid stink and smoke.  Grandpa was furious at the boys for their prank and I cried for hours over the loss of my toy dishes.  There was a piano in the living room.  Aunt Gen bought the piano but couldn’t play.  Aunt Helen learned to play it, and her girlfriends would gather around and sing the war songs while Aunt Helen played.  Aunt Helen’s brother James was in the Army and her brother John was in the Navy.  Aunt Gen’s husband Lloyd Paul Graffius was also in the Army.  There was a bathroom on the second, (the bedroom) floor.  When we left the grandparent’s home for the various places we lived, there was usually only an outhouse, and the baths were taken in a round zinc laundry tub set in the kitchen and filled by buckets heated on the stove.  Grandfather also had gas lights, then electric lights installed.  All the rented places I can remember, also had electric lights.  I can’t remember my grandparents having refrigeration.  I think they put their edibles in crocks or cans on the back porch, or in a kitchen window box.


I was middle in the family, having two older brothers and two younger sisters.  My duties as a small child were to look after my younger sister Ruth.  I can remember when she was about four and I was five and a half years old.  She came down with poison ivy, and also had boils all round her middle.  She also developed an earache at the same time.  My job was to keep her amused, and in bed, and to apply heated salt-bags to her infected ear.


Brother John was usually our cook when there was anything to cook.  My mother was irresponsible.  Sometimes grandma sent Aunt Gen to our living quarters with food and a whole meal prepared for us kids.  Mostly, we ate our “coffee-sop.”


I didn’t learn to cook until I got married, then it was a long time before I could serve a meal that was not either un-done or over-done.  I learned to sew of necessity, when our girls were small.   Their Grandma Neillie always bought them dresses they “could grow into”, to make them fit at the time, I  had to learn to take them in at shoulders and waists, and how to turn up hems.  Later on, I could make the girls clothes from scratch, through my own daughters’ sewing was more hand tailored than my own “home-made” articles.  There sure was a big difference between their work and mine.


I had about all the childhood diseases there were!  Chicken pox, mumps, measles and scarlet fever, even diphtheria.  In those days, they hung a big red or orange sign on the house, indicating the disease inside.  Those afflicted could go nowhere nor could anyone visit there.  When I had diphtheria, I was about five years old.  I was taken to old City Hospital Infectious House, which was a big wooden house separate from the Hospital.  I’ll never forget Mrs. Featherstone, the nurse there.  She was an older motherly type person.  Sometime during the night, they brought my baby sister in and put her into the double bed I was asleep in.  Mrs. Featherstone came in to do the bed and gave me a licking.  I tearfully asked “How come?” and she told me because I had let my sister mess in the bed.  I couldn’t convince her I hadn’t even known baby sister was placed beside me!!


Saturdays meant a day off from school. We walked about three miles to school, one way.  The bigger boys, (three uncles and two brothers) were supposed to look after me and see that I got to and from school safely.  Being as I was only five or six years old, they would very often run away from me on the way home and I would get thoroughly LOST.  Very often, I would wind up at the home of one of Aunt Helen’s girlfriends, where Mrs. Smead would cuddle me on her lap in her old kitchen rocker, and feed me milk and cookies.  Looking back on it from my now 70 years, I believe a psychiatrist would say I deliberately lost myself at Smead’s house because I received the affection and attention there that I never received at home.  Mrs. Smead would send one of her own boys to take me home to my grandparents, where I was inevitably punished for “running away from the boys.” 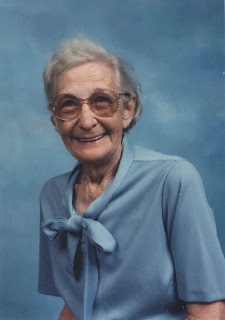